After the worldwide success of "Emotional Mentalism", Luca Volpe is back with the second volume which contains brand new routines for the serious mentalist and psychic entertainer.
All of the routines have been tested hundreds of times, on people from all around the world, in his private and public performances. Each routine includes...

For Your Entertainment Pleasure by Stephen Minch

Originally published in 1982, For Your Entertainment Pleasure helped set the tone for what card magic would look like in the Eighties, and beyond.

FISM Champion Daryl, "The Magician's Magician" detailed some of his finest original material here for the first time. There are classics like the Rising Crime Display,...

The Art and Business of Magic

The Magical Arts Journal is a ground breaking magical publication devoted to both the art and business of magic that was published and edited by FISM world champion magician Michael Ammar and magic publishing and event production innovator Adam J. Fleischer.

Have you been looking for that perfect card force for a certain trick? Have you been using the same one or two forces over and over for years? If so, you may soon be caught. It's time to learn more!

The Encyclopedia of Impromptu Card Forces is the first encyclopedic book on card forces. Many of the forces have never appeared...

An impossible prediction effect
A clear wine glass is seen on a table center stage, containing a black envelope with a prediction. The spectators are asked to concentrate on a single thought, write it down on a card and seal it in an opaque envelope. At your command, they all throw their envelopes onto the stage. A random spectator...

To have watched Colombini's Cups and Balls performance was like watching water flow. This award-winning routine was the talk of FISM back in the 1970's. Every move was thoroughly thought out and executed with a casual yet precise manner. Very highly recommended for any cups worker. Very limited quantities available!

This is the highly anticipated sequel to the smash success, Scripting Magic. Pete McCabe-with help from 25 of magic's best-digs deeper into the most powerful tool in magic: the words you say when you perform. This powerful book will show you how to get more out of the tricks you already do, and develop new presentations...

Andrus Deals You In

Long out of print! Andrus Deals You In is finally available again! This classic of card magic is considered by many to be as important as his famous Andrus Card Control books. This 160 page booklet has dozens of Andrus sleights, flourishes and routines, all illustrated by hundreds of drawings by the author. Updated,...

Alongside the double lift and the pinky break, the cull is perhaps the most important move in card magic. Few people do the move correctly, and even fewer use the move for anything other than secretly sorting cards. That all changes with Close Culls.

Singapore's Harapan Ong is a leading expert on all things cull, and here he... 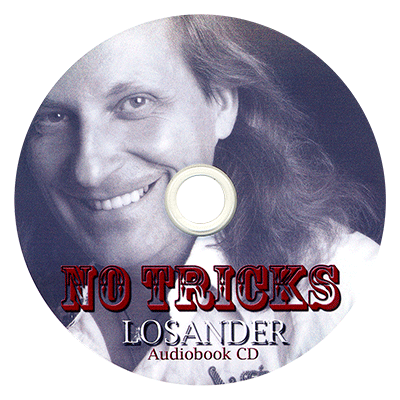 No Tricks by Losander - Audio CD

In this brand new audiobook Losander gives you some simple tools that will show you how you can improve your existing magic and bring it to a new level of entertainment.

Build security and confidence, don't try to play a magician, become one and live it 24/7.

Psiuke by Luca Volpe and Titanas

The book includes the complete collection of stage and close up mentalism routines, previously published as a single manuscripts, by Luca Volpe. Also included, as a bonus, new routines and ideas from some of the world's top mentalists.

The Classic Book of Safety Pin Magic is back in print! Safety Pin-Trix by Jerry Andrus has the best selection of tricks & routines for gaffed & non-gaffed safety pins! J.B. Bobo said in his introduction that many of the effects look like real magic! This is realized by performing many of the effects in a spectator’s...

Escapes by Percy Abbott is a very hard-to-find book. Not only are the escapes practical and fooling, but they scan the wide range of escape entertainment. Chain escapes, Wrist & Padlock Escapes, Straight Jacket escapes, Spirit & Platform Escapes, Coffins, Collars, Jail Breaks plus much, much more!