The name, Chris Congreave, is synonymous with commercial close-up routines and ideas. As a full time, close-up pro for over a decade, he has learned how to hone his magic in order to make it totally practical for performance to lay people in the real world. This new book brings together a collection of 40 of his best ideas, as well as providing...

A hard-hitting, ten-card effect that's out of this world!

Small World is a powerful, three-phase card routine. It amazingly gives the audience the power to separate a small, shuffled packet of black cards from red while they remain face down. The routine concludes with the audience matching the numerical order of the black...

"I want to state that this was my original magic in 2010. Now 2017, it has been made for around seven years. So, I decide to share with you, the techniques can be used alone, I hope you'll like them."
- Li Meng

Watch the amazing video presentation, as we cannot...

This is the shocking tale of surviving the notorious Nazi Regime. You'll learn how magic made a difference in two lives, as they journeyed from darkness into light.

By William V. Rauscher in collaboration with Werner Reich

"The structure Manos has created for Vox 2.0 makes the logic puzzle element that is so often obvious and transparent, almost invisible!"
- Ken Dyne

"Manos Kartsakis has come up with the most elegant, direct and easy to follow propless 'which hand' effect I have seen. For me my audience's ability to...

IF MIND READING EXISTED, IT WOULD LOOK LIKE THIS!

After having witnessed Proteus, spectators have no other alternative than to truly believe they have witnessed...

The Book That Doesnt Exist

Why be a follower?

Gregg Webb's CD-ROM/e-book The Book That Doesn't Exist And More! shows how to twist ideas into tricks and routines that are completely different from the mainstream -- resulting in an alternate approach to magic.

Marchand de Trucs and Mindbox have joined forces to bring you an incredible new project.

In The Green Neck System, Gabriel Werlen teaches you an amazing principle that you'll be able to use to perform a whole host of stunning magic and mentalism routines.

The year was 1969. An alternative experimental magic quarterly, initiated by Jon Racherbaumer came out during this exciting time in magic. Dai Vernon was exerting his seminal influence at the Magic Castle, Ed Marlo was at the height of his powers in Chicago, and a new breed of well-informed magicians were creating in unprecedented ways....

This limited-edition deluxe hard-cover book was designed for lovers of close-up magic,collectors, scholars, and historians. There are 232 tricks, sleights, and subtelties by over 46 contributors. Marlo, Vernon, Elmsley, Jennings, Klause, Lorayne, Zarrow, Dingle,Cervon, and more. Only 1,000 copies will be printed. 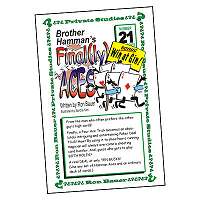