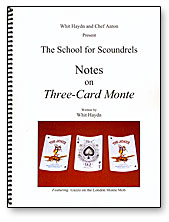 "I just finished reading Cartomancy... it's brilliant. The construction, the script, the thoughts hidden behind, the principles you've assembled... a lot of food for thought. Again: thank you!"
-...

"My friend, Shigeo Takagi, is an excellent performer who shows a keen knowledge of magic with all its subtleties. His work is direct and to the point, with no superfluous moves. Even if you are acquainted with...

Master one great rope trick and you will have a piece of magical entertainment that will serve you well for the rest of your life under almost any performing conditions. Rope Magic is the ultimate "packs small, plays big" effect. In The Award-Winning Rope Magic of Francis Tabary, not only will you learn the rope routine that won him the...

Lying in a dark undisturbed drawer for decades lay Harry Houdini's copy of THE DISCOVERIE OF WITCHCRAFT, a book written by Reginald Scot in 1584. It is the first book in the English language to describe sleight of hand tricks, and Houdini's copy was very special because it held the key to a mystery which fascinated magicians for...

One of the hottest areas in magic today is mentalism, and one of the major sources for the best mentalism ever published has been out of print for two decades: THE NEW JINX.

The sequel to Ted Annemann's classic Jinx magazine was published from 1962 to 1968 and contains over 300 pages of amazing...

Shall contemporary magic continue on its artless downward spiral or shall we, as magicians, accept and appropriate these gifts which bizarre magick offers us? This, it seems to me, is perhaps the most crucial magical question of our time. How we answer it will determine both the character and quality of magic of the future.
-Eugene...

THE EVENT MAGICIAN Volume 2: THE BUSINESS OF MAGIC FOR SPECIAL EVENTS

The Event Magician is an updated & expanded new release of J C Sum's critically acclaimed "The Event Illusionist" that was first published in 2004 and revised in 2008.

The all-new The Event Magician has been released as two...

The Event Magician is an updated & expanded new release of J C Sum's critically acclaimed "The Event Illusionist" that was first published in 2004 and revised in 2008.

The all-new The Event Magician...

This Is Not A Book - Neale

Wonder and magic surround us, yet we need a guide to see them. Historically, that guide is the magician—and Robert E. Neale is the celebrated mapmaker for this terra incognita.

This new Neale collection explores the sphere of close-up magic without playing cards. In the process, it expands the borders of magic in ways never...

"The moment John showed me this I knew it was comedy GOLD. What makes it a winner in my eyes is that it can be performed under any condition and is easy to do. A wonderful routine for the kids magician to parlor and stage performer."
- Michael Finney

This is a really cool trick. I have seen John Taylor perform...

Big News! Announcing the long-awaited brand new book from Silly Billy. It's called Super Sized Silly. That's because it weighs in at an impressive 400 pages! It contains 75 lessons to make you a better kid show magician, plus 150 routines by 100 different magicians. With 150 routines, you can create 10 completely different one hour...

What makes magic so much fun to watch? Is it the compelling story, the sense of wonder it creates, or perhaps even the beautiful ballet of cards that the magician brings to life? To be honest, all of these things are correct. Magic is an art form and like any art form it depends on what kinds of emotions it evokes from its viewers. The ability...

At long last the card wonders of underground mentalist Ben Blau have been amassed into a hard-bound volume. Ben has been quietly influencing the mentalism community for years with his meticulously-crafted miracles.

This 355 page, hard-bound and dust-jacketed book reveals many of Ben's most closely-guarded secrets, moves and principles...