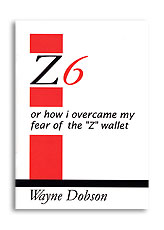 Between Two Minds Too

The combined talents of these two writers bring you thirteen diabolical and simple-to-do mentalism effects in one incredible book! Most of the items use cards, and there is also a rope-tie and an interesting effect using coins. You'll learn Into the Mirror, Superman's Eyes, Bogus and ten other sensational routines! This easy-to-read,...

Mentalists: This book is the one you've been waiting for. Jermay's routine 'Touching on Divination' - a prop-free mind reading routine - is finally explained in full detail and it's worth the price of this book alone. A 30 minute show all by itself, Jermay has been performing this phenomenon in his stage shows for years...

McCombical - The Wit and Wisdom of Billy McComb

BILLY McCOMB was a working magician and inventor of magic for more than 50 years. He was a prolific writer, a gifted illustrator, and could invent patter at the drop of a hat for just about any effect or circumstance. Join Billy and his friends Teller, Johnny Thompson, The Amazing Johnathan, Lance Burton, Simon Lovell, John Fisher,...