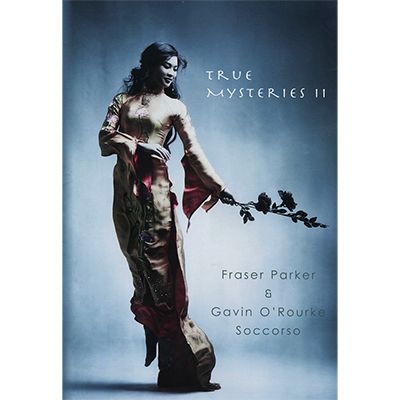 True Mysteries 2 is the sequel to the groundbreaking and highly acclaimed first True Mysteries book and DVD by Fraser Parker. In this book you will learn the real work Fraser and co author Gavin O Rourke- Soccorso use to create the illusion of hypnotic trance and feats of seeming hypnosis, without the use of such states or...

The book presents a twelve-step program for developing your own original magical effects. First, the traits and characteristics needed to open your mind to the creative thinking process are discussed.

Then, twelve techniques for creating new ideas and finding solutions to problems are introduced. These techniques are general in nature...

"I'm getting used to using the word 'genius' and 'Fraser' in the same sentence. Yoke can be taught and performed within minutes! Literally! This method is SO clean and direct you'll use it all the time!"
- Colin Miller

The Dark Side Of The Cube - Revelations by Diego Voltini

In 2018 Diego Vol ni introduced a Rubik's cube stack, which was de?ned by many as a game changer in Rubik's cube magic. The stack allows you to blind solve any face matching a color that is freely called out...

24 more letters from Mike Caveney's Classic Correspondence series have been collected into a beautiful third volume in this award-winning series. The entire book is printed in full color with added annotations, previously-unseen photographs, posters and...

Demonstrate with undoubtable proof that you knew and understood an image only thought of - not drawn, not written, not selected from a list.

Learn how to draw potential clients in with a virtual, fully interactive and exciting demonstration of mind reading.

Duplicate an image over digital media and under test conditions....

In addition, The "I Forgot of Something," is an incredible interactive trick,...

In this book Luca Volpe will explain three professional routines that he has performed all around the world for live shows and TV.

A deck of blank cards with 50 motivational words on them, is mixed by the audience, and five randomly chosen people each select a word. You not...

KIDSHOW MAGIC KOMPENDIUM is the biggest book of children's magic David has ever written!

1727 pages with photos and illustrations.

The editor of VANISH MAGIC MAGAZINE, Paul Romhany, went through and selected his favorite picks from the second year of VANISH and has released them all in a beautiful hard cover book, the COLLECTORS EDITION YEAR TWO.

Dr. Michael Rubinstein has finally taken a lifetime of coin magic and put it inside his new book, RUBINSTEIN COIN MAGIC. Packed within these 500 pages you will find twenty chapters with over fifty original techniques, over ninety complete routines and signature presentations, all...

A brand new book from Mel Mellers. Magicseen Publications is delighted to announce the publication of another collection of terrific material from comedy mentalist Mel Mellers. Entitled the Mel Mellers' Magical Mentalism Tour, this 9" x 6" soft back book runs to 92 pages and features 28 of Mel's mentalism ideas, each of which...

"The Trapdoor Card" is one of the most unforgettable, yet often overlooked, plots in card magic. Popularized by Martin Gardner and Bob Neale, this effect features a small card with a "door" cut out, just off-center. Someone is invited to hold the card by this makeshift tab. The magician is then able to turn the card inside out while it is...

THE CODE (English Version) by Fenik

Fenik has made his reputation as a magician's magician for more than two decades. He has been a student and friend of true legends of magic and is considered the most outstanding heir of one of the best schools of card magic in the world:...

The sixth book in the series, featuring The Irresistible Force, a three-card trick, and Irresistible Shopping, a mental routine in which three items from a grocery store are correctly predicted.

Deepest Sympathy is an "Impuzzible" version of the Sympathetic card trick....

The fifth book in the series offers twelve new effects of self-working (or nearly self-working) magic.

In this volume, Wishing and Making it So (a card trick for the telephone), Chicagoism, Thirty-Fiveism and Hacer lo Imposible (these three effects derived from...

The seventh book, features Stairway to Heaven, the amazing book test which allows you to use any Bible as a forcing book. Also, Robert Ramirez's Casting the Spell, an amazing Spelling routine, Four Card Monte (a classically Impuzzle interactive effect) and stand-up...

Distilled is a stunning collection of practical, professional effects plucked directly from the working repertoire of Ryan Plunkett, the resident magician at the famous Chicago Magic Lounge. Like a fine whiskey, this remarkable array of effects has been slowly distilled and refined across real-world performances for sold-out audiences...

Ryan Schlutz has become a master of creating incredibly deceptive effects that require almost no sleight of hand. In this book, he teaches a concept he has honed for over 20 years called False Anchors.

Within these pages you will grasp how to create a False Anchor, to change a person's perception so it becomes their...