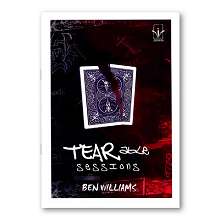 Have You Ever Been Asked The Question:
Can you do that trick where that guy threw the deck at the window and their card was on the other side? Well now here is the answer, a simple plot in which a torn corner of a signed card can be found anywhere you want (that includes the other side of a window!)

The Black and White Trick is a routine that Bruce Cervon kept secret for many years. In fact, Mr. Cervon coveted the effect to such a degree that he performed it almost exclusively for lay audiences.

This is a complete magical interlude that utilizes unique props and requires virtually no sleight of hand. Anyone can learn The...

Bruce Cervon's magic will strike your audiences like a bolt of lightening. The text and photos clearly explain everything you need to know in great detail, with telling tips and touches to help you get maximum reactions from your audiences. Included are Warped, a trick that fools everyone; Free Turn Pass - a revolutionary pass technique;...

"His effects fool me, and his ingenious methods amaze me."
- R. Paul Wilson

"Ramon Rioboo constructs card tricks with so many devious and interlocking layers of deception you just can't crack the code."
- Steve Beam

"Wow! This new book is an incredible compendium of some genius-level...

J.K. Hartman is back again with 60 brand-new effects in his latest book, Card Devilry. We invite you to revel in the wicked fun and mischief of these clever effects.

Known for short, clever routines, this prolific magician has long been a mainstay in the libraries of card magicians, and this new volume should not be the exception....

Patrick explores over a dozen effects and techniques with a shuffled deck to create powerful and memorable magic. Featuring "Double Thought," in which two cards are thought of and...

2018 Madison Edition of The Expert at the Card Table by S.W. Erdnase and Neema Atri

This is a very special 2018 Madison Edition of The Expert at the Card Table by S.W. Erdnase...

Artist Neema Atri has taken every one of M.D. Smith's original drawings of Erdnase's hands and modified them by giving Erdnase the tattooed hands of Daniel Madison! It is the perfect addition to any Madison or Erdnase...

You are about to encounter the card magic of Ryan Matney. These card tricks have been highly praised by magicians such as John Bannon (who wrote the introduction), Max Maven, Peter Duffie, and David Regal. They agree that what makes Ryan's magic unique is the attention to detail, the clever and subtle solutions to challenging problems,...

Studio52 has done it again! The Shift #2 is here! This is the second volume in the series and believe it or not, they have stepped up their game-with even more content and attention to detail than before.

The Shift #2 builds on the work in #1 with material to be used entirely 'in-the-hands', with no table in...

The Color Change by Crispin Sartwell

"This is the best compilation of Color Changes to date. I know this because I've been collecting color changes for the last ten years myself. I applaud his research and thoroughness. It is well organized and coherent."
- Jon Racherbaumer

"Crispin Sartwell has produced a well-written treatment of color changes that is...

Passport to Gaff Decks by Phill Smith and DMC

The Passport to ELITES Pro Gaffs is a compact book covering 6 original, exciting effects using the incredible DMC ELITES Pro Gaffs deck, from the repertoire of creators Drummond Money-Coutts and Phill Smith. Pocket sized, in a unique Passport format, the book details the presentation and handling for each effect. It combines usage...

Nick Trost's Subtle Card Creations series of easy-to-do card effects continues with Volume 7. As in the other volumes in the series these routines rely on subtle moves and principles rather than difficult sleight of hand. Once again there are over 100 tricks, this time collected in 11 chapters covering Gambling Tricks, Poker Puzzles,...

Card Magic For The Enthusiast by Paul Hallas

Welcome back to another compelling compilation of clever card conjuring for the card magic enthusiast. This book is not intended for beginners, as some knowledge of card magic is already expected. But there is nothing contained to bust your knuckles.

It's guaranteed that the card enthusiast will find...

Studio52 is proud to present the first in a series of special books by Ben Earl.

The Shift is an ambitious undertaking: presenting powerful magic effects, technique and theory in brand-new ways-creating a unique literary magic resource and a great cover-to-cover read.

The third volume of Subtle Card Creations offers another collection of brilliant card magic. The intent here is the earlier volumes - to present some of the most effective, yet easy-to-do card magic, avoiding all difficult sleights.

Over 100 tricks are carefully explained in 12 chapters. The chapters that are unique include:

Ryan Matney has taken some modern subtleties, concepts, and principles, put them on the boil and simmered them down to their essence.

It's all new, previously unpublished. This is highly-evolved, professional, self-working card magic from the mind of Ryan Matney.

A book featuring Meir Yedid's offbeat magic where he uses ordinary playing cards in extraordinary ways. All of these routines are visual, quirky and very memorable. Also taught are all of the techniques used within the routines. Written by Harry Lorayne and illustrated by Fred Kraus. Second edition published by Meir Yedid Magic in 2010....

This book revolves around one great routine that will give your audiences the impression of you having a super intellect and psychic powers.

The basic version was previously released in a private manuscript which debut at the 2009 Psychic Entertainer's Association's annual conference where it was a huge hit and an instant...

Back in print for the first time in ten years, and now on Bicycle stock! The Ultimate Triple Kick Monte and The Red Herring. Plus, Four Card Fooler and a NEW version (for all languages) of Killer OMG.

Effect(s): The Red Herring is an easy examinable comedy "Find the Lady" type effect. The Ultimate...