The book covers alternative designs for concealing your assistant in a table or staircase.It goes beyond the traditional base by exposing more contemporary designs. The book does not contain specific construction plans but the illustrations are sufficient enough for a competent woodworker to turn the ideas into reality.

Written By Guy E. Jarrett and Jim Steinmeyer with an Introduction by John A. McKinven

In 1981, Jim Steinmeyer produced Jarrett, but that was only part of the story... The Complete Jarrett is a spectacular new edition of the infamous Jarrett Magic, the controversial 1936 text on stage illusions. Guy Jarrett had constructed illusions...

The Joy of Magic (Book and DVD) by Miguel Gomez

This book is an open door into the work and character of Miguel Gomez, one of Spain's most renowned magic stars. In its pages you will find a balanced collection of routines, sleights, and essays of the highest magical caliber. Those who have long thought that the magic of Miguel Gomez was inaccessible to all but the most technically...

This is J C Sum's first complete book on original illusions & presentations. Widely acknowledged as one of the most innovative magic minds in Asia, J C is also one of the premier corporate entertainers in the region.

J C shares a small treasury of illusions straight out of his professional repertoire and material he has developed...

by Sos and Victoria Petrosyan

World famous Quick Change artists Sos & Victoria Petrosyan are performing their renowned. International Quick Change Show of lightning-fast changes and hip dance moves. This is sure a spectacular event! Sos and Victoria have appeared in acclaimed international shows and their performance is nothing...

Sell Your Act with Posters

Sell Your Act with Posters
by Samuel Patrick Smith

Dynamic Ideas For Promoting Yourself!

This book is a demonstration of posters and promotion. 24 actual, original posters by successful, professional performers are bound...

If you're searching for brand-new illusion concepts, look no further than Rand Woodbury's Illusionworks series of books. Volume One features fifty-three illusions, including Torturtina, Shadow Dancer, and Body Transformer explained with the aid of understandable... 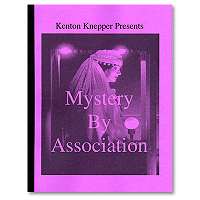 NOTE: THESE ARE AUDIO CD's

Imagine having one of the world’s top magicians in your home, discussing their magical life, their favourite trick, perhaps the tricks that have made them successful. You hear about how they became...

This book is packed with 101 effects from the fertile mind of Wayne Dobson, plus updates on previous effects and some new effects never published until now.

For those of you who want a physical collection of Wayne's magic, this book is for you.

Comes in the form of a hardback a4 size, 200 page book for easy reference...

Teaching Magic: A Book for Students and Teachers of the Art by Eugene Burger

Published by Theory and Art of Magic Press

From the beginning of his illustrious career, Eugene Burger has demonstrated that performing magic is different from presenting a trick or a puzzle. It requires that we genuinely astonish people with an experience of the impossible.

But how can we learn to perform magic that meets...