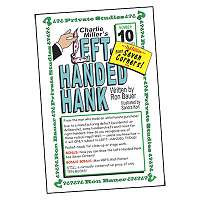 Imagine ... extracting a two-inch contact lens from your eye and changing it into a pair of glasses ... causing a spectator's card to rise completely out of the deck and then hover in mid-air with a life of its own ... having the spectator's selected card develop right before their eyes like a Polaroid picture ... viciously tearing...

Whit Haydn's comedy cut and restored rope routine, The Mongolian Pop-Knot, was developed on the street corners of New York in the late 1960's. Like his famous comedy routine with the linking rings, this routine of Whit's has become a standard. The routine flows from section to section, with each new part of the routine justified...

Much Ado About Something

The last book written by Karrell Fox, the legendary "King of Korn." Chock full of "goodies," not to mention well-illustrated ideas for kid-show magic, close-up tricks, tradeshow material and stage magic, as well.

My Canes and Candles, Fantasio

Fantasio's innovative magical inventions have been used for decades now by many of the world's most famous magicians. Now, for the first time, the genius behind the magic explains everything about his brilliant creations in My Canes and Candles. In this beautiful, fully-illustrated volume, you'll learn everything you ever needed...

Now You See It Now You Dont

This book is highly recommended for beginners and professionals. Bill Tarr presents you with the basics of sleight of hand using cards, balls, thimbles, cigarettes, and other common items. Tricks include Three-Card Monte, Cups and Balls, and much, much more. 224 pages.

There is no better way to describe this terrific, hard bound book than to list a small sample of its contents: Cigarette Routines, Thimble Magic, Modern Card Sleights, Card Effects for Stage, Ornamental Sleights with Cards, and lots more. This well illustrated volume should be on your shelf.

The Phoenix was published biweekly from 1942 to 1954 and presented well versed practical tricks. The most talented magicians of the time contributed their best ideas to The Phonix; effects that fooled magicians.

Now for the first time the complete 6 volume set is available on CD ROM. Search through over 1200 pages with the interactive...

Pocket Sawing In Half

Cut Yourself In Half! Anywhere at Anytime! Surrounded by Spectators!

Andrew Mayne's Pocket Sawing In Half booklet contains 6 different ways to apparently perform the classic sawing in half illusion....on yourself! Two of the routines can even be performed surrounded by spectators. The complete 12 page manuscript includes 35 photographs...


This series will eventually be the most intensive collection of sponge ball magic ever put on paper. Volume 1 deals mainly with the sleights but does include several killer routines. You'll learn palming plus 12 different vanishes. Sponge balls have alwaysbeen an audience favorite and this book will teach you all the necessary skills....

Make broken objects whole again! Float a table in mid-air! Have solid objects vanish and the reappear! Read people's minds! Induce a hypnotic trance! All these and many other classic tricks are within your grasp when you follow the directions in this amazing book by one of the greatest magicians of all time.