A vivid and evocative casino-style deck, SHARKS V2 is the latest creative collaboration between British magician DMC and magic designer Phill Smith. As the creative alliance behind the now world-famous and award-winning ELITES playing cards, this latest unmarked creation harks back to the first ever deck created by the pair,...

An American original, the Bicycle brand celebrates over 130 years of playing card history with the reproduction of the Autocycle #1 card back design printed from 1901-1906.

The intricate back depicts a rider on a motorized bicycle, and the tuck case and tin graphics were inspired by hand-drawn elements from an 1892 Bicycle Juniors...

Rider-Waite Tarot was named one of the Top Ten Tarot Decks of All Time by Aeclectic Tarot.

The cards were drawn in 1909 by Pamela Colman Smith under the direction of Arthur Edward Waite. Smith's vibrant drawings transformed the standard tarot deck.

"A unique feature of the Rider-Waite Deck, and one of the...

Are you seeking an absolutely beautiful deck of cards to show off? Prism: Night Playing Cards is a fully custom, unique, and beautiful deck of playing cards inspired by the explosion of light into rainbows when passing through a prism. Each card face is printed with an extra layer of thick glossy ink which catches the light...

The highly collectible Ace Fulton's Casino playing cards in an all-new black and pink colorway. This new edition to the series features the original enlarged logo back design, Arrco-style Court cards, a new Ace of Spades and matching marquee Jokers.

LIMITED EDITION: Only 800 printed! Will NOT be reprinted.

Crafted and designed to make ART

EXPRESS WHO YOU ARE

It is time for you to be recognized as an ARTIST with Arte Playing Cards.

Tell the world through magic who you are, what you like, and what excites you.

Like a blank canvas, Palette Playing Cards is one of the MOST unique decks you will ever own for cardistry, flourishing or magic. 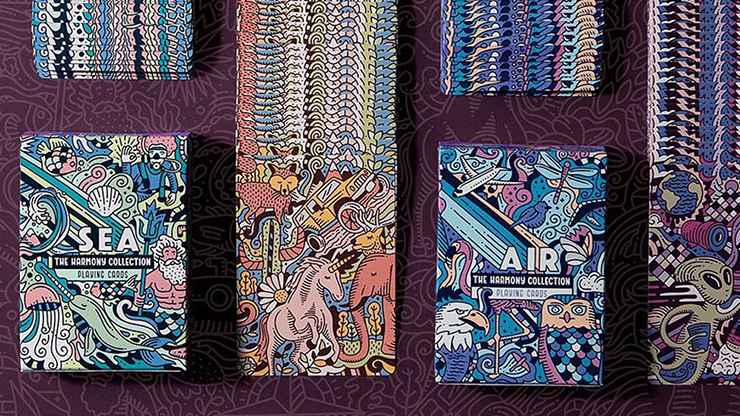 The Harmony Collection by Art of Play


Four decks. One mission. Our future depends on it. With every deck sold, Art of Play will plant one tree.

The Harmony Collection celebrates our planet's natural resources with four unique decks representing Sea, Land, Air, and Space. Together they embody our oneness as seen from the stars.

The details spanning the...


LIMITED EDITION: Only 500 printed! Will NOT be reprinted.

Among the precious stones, jade stands out for its veneration in the most ancestral cultures. The etymology of its name in Spanish already highlights its healing properties. Its use in utensils, beads and weapons for thousands of years has made this gem an object of enormous value that also attracts good luck.

All its beneficial and...

"Clockwork: La Ville Lumiere" Poker-sized deck is based upon the city of Paris, France, in a brilliant Art Nouveau style (with some inspiration by Czech artist Alphonse Mucha). It gives the beholder the experience of holding a clockwork jewel-box while viewing...

This design was born from a deep interest in typography and the search for unconventional typefaces that push the boundaries of form. Our goal was to create a deck design that challenges the preconceptions of what a deck of cards can look like.

LIMITED EDITION: Only 2927 printed! Will NOT be reprinted.

Here's the debut deck from cardistry brand, December Boys, that was released at Cardistry-Con. It brings to life a new experimental concept that will take your card visuals to a whole new level.

The borderless back design was created to enhance the flow of...

Inspired by vintage tobacco industry packaging, the No. 13 Table Players Edition is the first deck in a six-deck series.

The No. 13 deck features a classic look, with well thought-out designs and colors. Each Table Players deck features the beautiful Kings Wild standard Court cards for easy table play. The No....

Inspired by the simple and graphic design of a traditional eye test chart, the 20/20 deck features a fun line up of quirky Court cards, full of vibrant color and life. The 20/20 Playing Cards decks are designed in a way that makes the cards a joy to look at and also very usable for any type of card game. The 20/20 deck...

The shadowy silver figure of Merlin summoning his magic - bringing MERLIN • Illuminations to life! With wisdom on his brow and might in his hand, he is an archetype, the genome, the father of magicians. What spells...

You may have seen the original Falcon Throwing cards on Ripley's Believe It or Not, or on countless viral YouTube videos with well over 10 million views! This deck took the card world by storm featuring a stock made by the USPC specifically for this deck!

We are proud to announce the sequel to this limited edition deck - "Silver...

Introducing Axis Playing Cards, a Neo-Tokyo inspired deck of cards with a twist, Literally! Made in collaboration between Occupied Co. and Riffle Shuffle.

Axis features a flipbook-styled back design, that when riffled through, will cause the globes...

Be prepared to be mesmerized with the Bicycle Hypnosis deck - perfect for everyday play and cardistry alike. With its borderless back design, Bicycle Hypnosis was specially created with the cardist in mind. The design will enhance the flow of all flourishes, fans, and spreads. The Hypnosis card faces feature over-sized Court...

This time, we explore the deepest depths of space. Rumors of a strange phenomenon at the edge of a black hole have brought travelers from far and wide to seek adventure and discover the truth. Steven Harrison, the designer of Play Dead, channeled this adventurous fantasy...