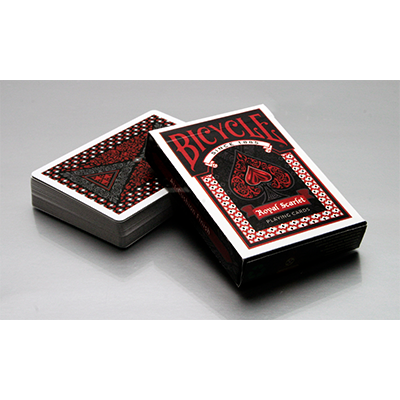 The cards are textured in Red, White and Black and they're as rare as a Kings fortune. The pips are a clean and clear design which look fantastic fanned out. The tuck case displays a perfect spade with an upside down heart giving it a bit more life. Be one of the very few to own this majestic deck. 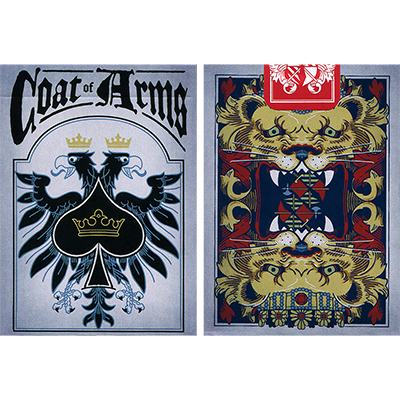 A Custom Deck of playing cards inspired by Coat of Arms. Created by Justin Froyd.

Each card is unique. Each court card has a different coat of arms. Kings and Queens have crowns and the Jacks have Knight helmets.

The Phantom Deck has a great visual style making it a great addition to your playing card collection. This unique style is carried out through every element of the deck:

Printed by the USPCC

With a stark and crisp black and white design, this highly stylized look was created by acclaimed French artist Sam Hayles at Dose Productions. 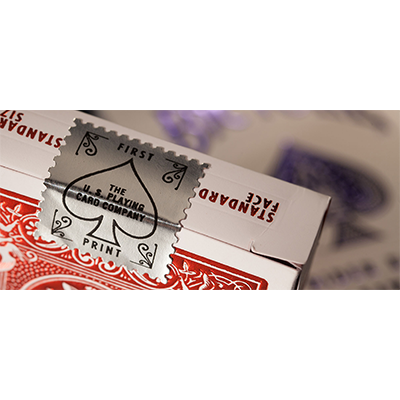 Exclusively from The United States Playing Card Company, the proprietary MetalLuxe™ technology gives these cards ideal flexibility and durability equal to a standard Rider Back card. Stamped with real metal to achieve a dazzling shine, each MetalLuxe™...

Straight from the underground world comes a group of dirty misfits known as Sewer Dwellers. Be the first to own this rare deck with only a 2500 print run.
The deck has been printed by the United Sates Playing Company.
Make sure you get yours before they find their way to the Sewer Dweller's

Promotional deck for DeckStarter, an amazing new platform that will allow designers to create their own playing cards.

Back in 2012 when Alejandro, Dan, and Dave began working on the concept of DeckStarter they designed and printed an exclusive deck of brand playing cards.

Only a limited number was printed and once they sell...

Live the good life with the Gluttony Deck by Collectable Playing Cards. Excessive eating has become the new norm, but back in the day good eats were a luxury. This deck combines both comedy and elegance with its royal greens and golds along with curvy patterns. It is a great addition for any collector and can fit in many different...

Considering the popularity of fantasy-style movies and computer games nowadays, I believe this genre will appeal to many of you. For 2 years, we have been creating numerous heroes and we believe the deck that we've created is a small masterpiece. We hope you will appreciate it as much as we do!

Considering the popularity of fantasy-style movies and computer games nowadays, I believe this genre will appeal to many of you. For 2 years, we have been creating numerous heroes and we believe the deck that we've created is a small masterpiece. We hope you will appreciate it as much as we do!

Take a step back in time to Fifteenth century Africa, a land untouched by the Western world. A nation where arts and entertainment were more than a vehicle of self expression -- they were a way of life.

Lost Wax Playing Cards is a tribute to the West African land of intrigue -- kingdoms, where wonder was traded in place of...

The final issue of the LIMITED EDITION COMIC MINI SERIES - Magicians Must Die has arrived! De'vo created the world's first comic series printed on a deck of playing cards and this series took the comic world by storm. De'vo's comic has appeared in an MTV interview, on the cover of Strange Aeons Magazine, and in comic cons...

A Magic Warehouse exclusive! Designer Billy French (Seekers, Bloodlines) has developed an entire gaff pack to go with his runaway hit "Bloodlines" artisan deck, and you can only get it here at the Warehouse!

Designed for the working magician, each gaff pack features:

BONUS: BUY 2 BLOODLINES ARE GET THE GAFF PACK FOR FREE

As a professional designer and an amateur magician, this is my dream project. I've been collecting cards myself for several...

The next evolution of the ultimate throwing card is here - introducing Banshees Advanced! This incredible deck has been re-engineered from the ground up for maximum speed, durability, precision, and impact. The Banshees Advanced not...

Card throwers destroy dozens of decks while practicing their throwing. Banshees are engineered with a blend of high-grade plastics to maximize cutting and penetration power, all while keeping the cards extra-durable...

The Bicycle Gold playing cards are the epitome of elegance and class.

The faces feature custom pips and suits of baroque influence, and the intricate backs that resemble gold foil, are printed in a deep gold metallic ink....

The first in a series of three designs. This deck was created to encapsulate the characteristics behind the International Typographic Style, or 'Swiss Style' graphic design. Focusing on how...

Play cards outdoors without any worry!

Outdoor lovers will instantly fall in love with this unique deck of cards! Hoyle Waterproof Playing Cards are ultra-durable, waterproof, and make any game more fun by being clear. Perfect for the beach or camping, these cards are well-suited for almost any wet or humid situation.

Brand new back design, Ace Of Spades, Jokers and Tuckcase.

Can be integrated with standard bicycle cards and other decks from the Karnival-Inc range for creating super...

Time is the most precious gift. It lets us imagine, and drives us to create.

The Memento Mori Blue is a celebration of life, a sign of what inspires us, and a constant reminder that our time here is fleeting. It is a symbol of our eternal defiance against our own impermanence. It is a design reminding us to create, to imagine,...

Stemming from the medieval Latin theory and practice of reflection on mortality, it has been a ubiquitous part of human culture for centuries. From the philosophical to the artistic, the fascination, fear and appreciation of death has consistently captivated and cultivated our imagination.... 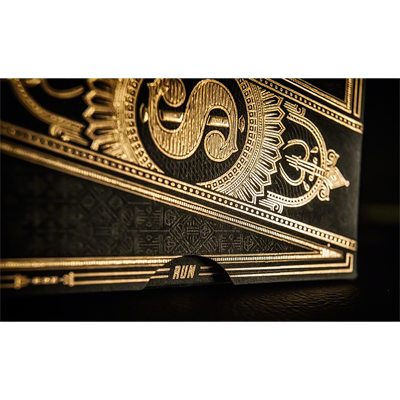 It's a sin to let a sucker keep his money. So, leave honor in your rear view mirror, because only two things matter in this world... this score, and surviving it. Run Playing Cards embraces nerves of steel and a clean getaway into a superior deck of cards, with... 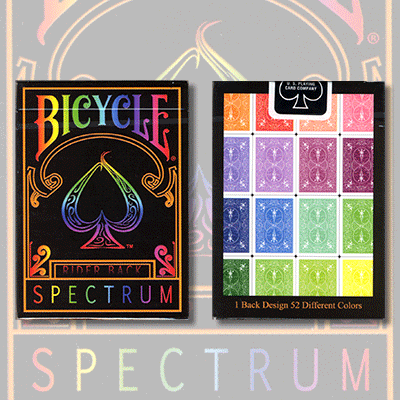 The SPECTRUM deck is not a trick. It's a UNIQUE and BEAUTIFUL deck of cards which CAN be used in many magic effects.

The SPECTRUM deck is the world's first and only TRUE Bicycle rainbow deck! What does that mean exactly? In 2001, Cosmo Solano had been performing a "rainbow deck" routine for years and...