A timeless, classic design - masterfully updated. We are now proud to offer the first ever METALLIC deck of Bicycle® playing cards.

Your favorite cards, fully optimized and transformed into something you have never seen before. Bicycle® playing cards have been the industry standard for over a century. Originally unveiled...


Developed with input from the world's top professional poker players.

The exclusive PokerPeek design features a smaller, diagonally positioned corner marking (pip) to discreetly view and identify the card (see photo) as well as a jumbo-like face positioned lower at the center of the card, making the cards easier to identify...

Sentinels challenge everything you know about high-end playing cards. You have never seen a deck like this before.

After hundreds of pages of research on the history of magic, hermeticism, secret societies, and mythology. The result is jaw dropping - unlike anything you have ever seen before.

The box is printed on imported...

The gunmetal colored box glistens in the light and demands attention with its hardened steel aesthetic. The box is made of paper 25% thicker than the Sentinel tuck case....

These limited edition series Bicycle playing cards features specialty designs with Gong Xi Fa Cai or "Wishing You Prosperity" theme to usher the new year.. Available for a limited time. Every deck provides you with the same exceptional quality you've come too expect from Bicycle. Now with a fun new look.

These limited edition series Bicycle playing cards features specialty designs of the Chinese Zodiac Characters.. Available for a limited time. Every deck provides you with the same exceptional quality you've come to expect from Bicycle. Now with a fun new look.

Vincenzo Di Fatta are proud to introduce the new Bicycle deck with rainbow back.

Even the case is rainbow.


Bee Playing Cards Perfect for any gambling demonstration or magic routine with a gambling theme. Bee backed cards feature the all-around back design used by casinos worldwide and are available in poker size, with red or blue backs.

Design: Paul Harris directed the development of the new 809 Bicycle back with USPCC. Paul worked with three world class artists (including Garrett Thomas) to create a soothing traditional looking back that's instantly trusted...

Playing cards by United States Playing Card Company brings to you the excitement of the World Series of Poker home with these Tournament Edition Playing Cards. Striking deck for any professional player or hobbyist. Impress your friends at the next poker game with these Authentic World Series...


Arcane is the first in Ellusionist's new line of Signature playing cards. Whether you infuse your magic with as much magic and mystery as a fantasy story, or you ground yourself in reality through gambling demonstrations, these cards will help your performance become more elegant, mysterious and powerful. 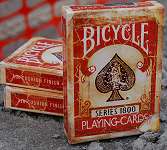 
Think of a deck that is ancient and worn.

Imagine a deck of playing cards if you left them at the mercy of the elements for a century.

1800's appear to be ripped out of history. Gun battles were fought over these cards. Lives were lost.

No detail was left untouched-- artwork on each card was...


Playing Cards produced by USPCC have been known for their exceptional quality for 125 years. The United States Playing Card Company is commemorating there 125 Year Anniversary with these Special Edition playing cards featuring a distinctive Vintage aesthetic with a signature metallic foil face on the special edition tuck case. Refined in...


These high quality playing cards are perfect for any card magic, or just to play poker. The deck includes instructions for the most popular form of poker presently, "Texas Hold 'Em"