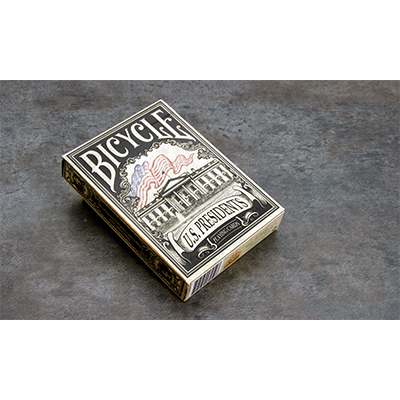 The US Presidents deck has been in production for many months. Each card has been hand drawn to feature the most intricate details. This deck features all 44 presidents and 4 popular first ladies as queens. Although there is debate over which presidents should have been on the court cards, research has been done before making the choices....

Adrift represents a deep and meaningful love for the ocean shared by both artists.

However, their meanings are different: Take yourself to the Adrift, or don't.

Printed by Cartamundi in Belgium on their improved B9 finish.

If you know a bit about Asian culture, you have probably heard of the Monkey King. That's right -- it is the cunning-looking monkey that we are talking about. The story of the Monkey King originates from an ancient legend that, along with others,...

Their previous limited editions sold out just minutes after release, and have been seen in Stan...

It's been called the birthplace of America. Dating back to 1682, Philadelphia is a city with a history and culture unlike any other. Provision Playing Cards is a monument to the city's historic past and a tribute to its present.

Illustrated by hand in Philadelphia, Provision Playing Cards is 100% Made in...

We celebrate the legacy of Wild Bill Hickok and the gambling lore of the Wild West with The Dead...

Come one, come all!! Gather around to see the cure for what ails you!


These cards were designed to be the best for playing card games and also beautiful to look at. Using four differently colored suits is often referred to as a No-Revoke deck because the four colors reduce the risk of accidentally playing the wrong suit (Revoking). Four-color decks are perfect for Texas Hold'em, Rummy, Hearts, Spades,...

This is a hand designed deck of vintage playing cards by Michael Scott. He designed the deck to have the feel of a classic late 1800's deck. It has a synthetic vintage long tongue tuck case with printing inside. It comes with a vintage stamp seal. The deck has 56 cards -- 52 playing cards, 2 Joker cards, a double back card and a vintage...

Design concept: From the first moment you pick up this beautiful deck to its daily display and usage, its unique charm is constantly visible.

LIMITED EDITION: Only 1111 printed! Will NOT be reprinted.

Be Attractive Be Useful

The primary tone of this deck of cards is red and black, and both of them are rich. The red highlights the richness of the black...

Add a touch of mystery to your performances with this unique deck of number cards that looks as though it comes straight from 1900... With its aged appearance, it's perfect for everything from bizarre magic to classic routines.

The second edition to the Regalia Playing Cards series. From the creative mind of Shin Lim and printed in Belgium by Cartamundi, comes a one-of-a-kind deck that was first introduced last year with an overwhelmingly positive response.

The box is made from two...

Inspired by the literary genre CYBERPUNK, we present a dystopian society where humans are mixed with machines and also physically plug into something that today we call the Internet. In this chaotic world full of conspirators and oppression, many gangs are rising,...

U.S. Games Systems has proudly reissued the Hermetic Tarot Deck in recognition of its historical and artistic importance. The details and symbols in each card reveal many of the esoteric workings of the Secret Order of the Golden Dawn, which flourished around the turn of the century.

Made according to the 1970s casino-style, reaching 85% of a Jerry's Nugget deck feel. Front and back of the tuck case have the card back design, with a unique 68mm serrated retro seal. These cards are very suited for Cardistry and Florishing. They fan well right out of the box, and the edges of the deck are exceptionally smooth and...

LIMITED EDITION! Will NOT be reprinted!

Denim is one of the most durable, indestructible pieces of clothing ever created. It is for the blue-collar workers who don't mind getting down and dirty. Now introducing one of the most rough-and-tumble decks on the market today, the Bicycle Denim Deck by Collectable Playing Cards. Every aspect of the deck comes down to the precise...

Time to let competition heat up.