Bicycle Censored Playing Cards, originally known as FCKYRBRND Playing Cards, was designed for those who want something more unique and different from other playing cards on the market.

Printed by the USPCC using their premium stock, the deck also includes an entire custom design, including the court cards, Jokers, and the...

A message to you, dear reader, from the mysterious, new Bicycle Codex Playing Cards.

There is a world that exists between the lines. A world of secret symbolism and hidden meaning. In full view, visible to all. But only those in the know, know. Those without, seek to know.

I am the gatekeeper. The key to unlocking...

The inspiration of this series of playing cards is derived from the beautiful constellations that can be seen in the sky. There are 12 decks of constellations, and the patterns of the background are all interpretations of these zodiac signs. In addition, all designs are hand drawn.

The Bicycle brand celebrates North America's (US and Canada) craft brewing spirit. A spirit that captures the passion for their craft, signature look as well as product, and the entrepreneurial drive to turn a hobby into a business. Each of the 52 cards in the deck feature a unique logo. From all parts of the US and Canada, these 52...

Bicycle House Blend Playing Cards, a deck that brings the coffeehouse experience home to you. Each of these cards has been fresh brewed in our factory to infuse your card playing experience with the feel of your local coffee house. Every element of this deck is good to the...

Prepare to go koi crazy with the brand new deck from Collectable Playing Cards -- The Bicycle Koi Playing Cards! This deck was inspired by the beautifully colored fish that are mostly found in Asian cultured ponds and gardens around the world. The word, koi, is a symbol of love and affection and is known as the friend of the sea....

The bird that's the emblem of the United States, majestic in its appearance. It is not always so majestic in habits: it often feeds on carrion, including dead fish washed up on shore, and it steals food from Ospreys and other smaller birds. At other times, however, it...

Bicycle Magic Playing Cards is an artistic tribute to every impish trick that has astounded audiences for over 5,000 years.

52 mini canvases playing respect to the acts of magic, under the watchful eye of the spectator.

Will they be transformed to that bewildered state?

The theme of the deck is reminiscent... 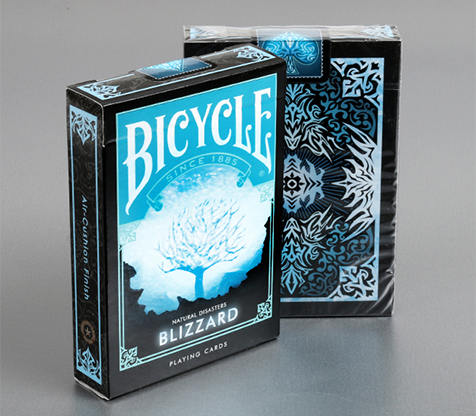 The Bicycle Natural Disasters "Blizzard" Playing Cards is the final deck in a series of 7 natural disasters. All the natural disasters are the deadliest forces that mother nature has to offer. Be sure to take shelter!

The Bicycle Natural Disasters "Tornado" Playing Cards is the forth in a series of 7 natural disasters. All the natural disasters are the deadliest forces that mother nature has to offer. Be sure to take shelter!

All beings experience rebirth within the six realms. Desires and ignorance culminate in karma that determines whether beings will reincarnate in the realm of the devas, asuras, or the realms of the animals, the hungry ghosts or hell. Nirvana awaits those who are born into the realm of the humans.

The Bicycle Tattoo Deck is produced by Diavoli Production - Germany and features artwork by Stephen Rooks. Borders and faces are black, and each suit is in a different color:

Comes with two jokers, a custom ace of spades,...

Unicorns may not be real, but this deck of Bicycle brand playing cards sure is!

A 1937 vintage card back inspired the design that features this mythical creature. It is sure to evoke whimsical feelings while offering up a vibrant colored deck of playing cards. This magical deck with its bright colors will be sure to put a twist in...

Between the Lines Playing Cards by Riffle Shuffle

The name Between the Lines, implies the message that is tacit, that it cannot be seen from the outside. Value that can be recognized without being expressed. Thus, the perfect name for this deck of playing cards. The name also literally implies the space Between the Lines. The faces of cards are designed to be seen only between...

Do you feel hungry when you see this deck of Bicycle Matcha? I do. As BOCOPO's 2018 new design, this deck mirrors the art of creating the appetite simply by using green and white colors. It's amazing to utilize the light and dark green colors to make you feel as if you have smelled the fragrance of the Matcha cake, which are...

A deck with the hypnotic beauty of a snake by ShapeShifters Playing Cards, printed by the USPCC and distributed by Gambler's Warehouse.

Enigmatic, dangerous, elusive... its curves awaken a mixture of fear and curiosity provoking a hypnotic attraction. Since the devil himself used its form to tempt the first woman in paradise,...

Cardistry Switch is a ground-breaking deck built for Cardistry and fanning! It also shares the same back design as WTF2, giving you flexibility to make miracles happen!

Cardistry Switch has De'vo's signature twin tip mirror back design AND his "switch" pip faces, meaning that you can Switch the face cards from...

If you like hunting and taxidermy, then the Open Season Playing Cards are a must have for your collection! The deck is inspired by the lodgy get-away weekend with your closest buds and some well-deserved brews. It's a warm reminder of one of man's favorite past-times and a way to survive the elements on your own. The Open...

Spud Playing Cards (Green Edition) was designed with cardistry in mind. Whether you're doing fans, cuts, spreads, twirls, or aerials, your moves will be accentuated by the vibrant colors and design. Identical, non-standard faces keep everything consistent and reveal a stripe when fanned. Printed with Expert Playing Card Company's...

A retro-classic vintage inspired design for the modern player, collector, cardist or magician. The Guard Slate Playing Cards is expertly designed by well-known Polish artist, Artur Rajch. Interesting touches have been provided for the court cards and Aces. And, of course, someone is standing guard on the tuck case.

The colorful and stunning frame on the card back is unlike any of our previous works. It's beauty comes from the innumerable color lines but not inconsistent interacting with each other. It's like holding huge brain waves in your hand.

When you open a fan with this deck, it will look different in both directions.

Limited Edition. Will NOT be reprinted.

Hey guys, Shin here! I am so happy to introduce my new Limited Edition deck of custom playing cards, NOC x Shin Lim.
These playing cards have made many appearances in my magic routines on T.V. and is the perfect fit for the magic moments I strive to create.

TCC Pure Marked Playing Cards might be the single most powerful tool a card magician could ever use. If you're serious about card magic, get a couple of these decks, and enjoy.