Do Not Borow Your Phone by Dan Alex - Video DOWNLOAD

Do not borrow your phone!
It is not a suggestion, it's the new and shocking effect created by the sick mind of Dan Alex #Liar.

A surprising effect with any borrowed spectator phone!

The magician borrows a phone, then scratch the screen with her fingernail,and shows the spectator a little piece of the screen raised!... The most visual borrowed bill change. A napkin rose by any other name does not have to look the same. Inspired by the children's classic, The Little Prince, Vincent Mendoza has worked for a many years re-engineering the simple napkin rose. Finally, a breakthrough insight allowed him to take an existing thing of beauty and craft it into a thing of art. True to the tenets... Control Their Phone AND Their MINDS!!!

VIRAL // A gimmick that allows you to turn a borrowed cellphone on by itself, Imagine you walk up to a spectator and ask them if they have and you can borrow there cellphone, then you ask them to turn it OFF, (IT IS TOTALY OFF) you then put the cellphone on your PALM,TABLE,OR JUST BY HOLDING... Two of Canada's busiest performers join us for an unforgettable and exclusive experience for the month of July! First off we have the world renowned Mentalist/Hypnotist Spidey (creator of Scar, Spectre, Psycho etc..) sharing with us his very first live lecture! We'll be getting to see some exclusive, never-before...

27 real-world effects from the hottest magic newcomer in years in a 3 disc box set that will blow you away! Fill your cigarette box with magic.
A detailed video tutorial will teach you everything.
Easy to make Gimmick.
Easy to perform.
Perform any where, anyone, any time. With a shake you cause a rubber band to restore by itself. SPRaY vANish by Sandro Loporcaro (Amazo) it is an alternative way to vanish a coin or other small objects, as for example: rings, keys, gaming chips. It can be performed without the use of sleeves. You can also use to change a coin with a key as explained in the video explanation. Suitable for the close up-magic. 100% total vanish!... This is a clever routine with two dice. Make the spots change in ways unimaginable. PEKI has improved the routine from Dr. Theodore Sacks, which was published in the year 1963, into a very clever performance.
While he holds two dice between his fingers the points change many times and very fast right under the eyes of the spectator.... The selected card flies off the spectator's palm and into the magicians hand!

A card is selected by a spectator and returned to the deck. The magician tries to find it and claims to have it narrowed down to a few cards, but will need the spectators help. The spectator is asked to extend one of their hands, palm up. The magician... "Watch" is a new spin on the old idea of stealing a watch - it's a reliable technique that is foolproof if learned properly.
It works performed speaking or silent, close-up or stage, and lends itself to stealing the same watch twice in a row, or stealing two or three watches from a group sitting close-up. Jacques has tested it in... Do you Believe in Demonic Possession? Probably not, but your spectators will ! Imagine being able to Bend and fold a borrowed Dollar bill with unseen forces as you hold it at your fingertips! There are absolutely NO ATTACHMENTS, THREAD,MAGNETS OR CHEMICALS Involved at all Both Hands can be shown empty...This is Possessed Razor Blade Through Hand by Sandro Loporcaro (Amazo) it's a new routine, perfect for close-up, television and street magic. A razor blade pass through your hand! You can submit this effect surrounded by the audience. It uses any deck of cards, two cards chosen by the spectators. Take a razor blade and place it between two cards and on... Harming yourself has never been so fun!
Thanks to this little secret you can impress your friends.
Imagine taking a pointed bolt and scratching your arm red and bloody.
Then you can magically heal yourself immediately! Ruhko is known for his ingenious impromptu trick such as mars, and antigravican. Now he come back to bring you a whole new KILLER solid through solid works.

Magician have several tic tac in his palm while he shows audience...

We are proud to bring you Murphy's Magic's own product developer, Kyle Marlett. Kyle has experience creating magic for the biggest names in the business, including Criss Angel and Cyril Takayama! Known amongst creators as the consultant to the stars, Kyle is bringing some never before-seen effects to this very special At The Table... Why should you be there? We have FOUR reasons! Even better, how about FIVE? John Archer, Joshua Jay, Caleb Wiles, Nick Einhorn, AND Mark Calabrese!

John is a stand-up comedy magician from the UK. This guy was officially the FIRST person to fool Penn & Teller on the UK series. If...

Watch live or download and view at your convenience.

We are proud to bring you an incredible May line-up for our At The Table Experience subscribers! We'll be sitting down with two of the most prolific magic consultants in the business.

Mike Hankins - Oh, how the table has turned! Mike Hankins, the former host of the ATT series is now our welcomed guest! Mike has worked as a consultant with the biggest names in the industry, including David Copperfield. Find out what type of secrets Mike has been hiding from the world in this very... 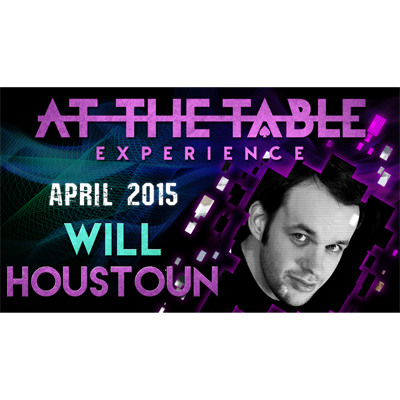 Will Houstoun is an international award winning magician who specializes in consultancy for film and advertising as well as instruction on both the technical and historic aspects of magic. His talent has been recognized by the likes of Martin Scorsese, as he worked as a consultant for the movie... The Invisible Deck - You know the effect of this classic trick: A freely named card is the only face-down card in a face-up deck. But when you watch the performance, you're going to get fooled. Using routines by Bruce Cervon, Allan Ackerman, and Steve Beam as a starting point, Michael has produced a... Eric Ross has been one of the most prolific creators in this industry. His edgy style and creative mind have landed him on some of the best platforms, including the Ellen Degeneres show. Eric has been actively creating magic for years and has brought a slew of great, working effects with him for...