A set of 4 clear tumblers, of similar shape and design, each twice as large as the other. Milk poured from the largest tumbler fills the second largest, then the next, and finally the smallest. Or do it in reverse, filling the glasses from the smallest to largest. Special trick glasses and instructions.

Yet another accessory to insure a big laugh in any coin box routine. With the lid on, it looks exactly like an Okito Coin Box, but it is actually a solid piece of brass. No top, no bottom, just solid heavy metal highly polished base only.

This gimmick is fantastic. The coin looks perfectly normal from one side but has been cleverly gimmicked to squirt water at unsuspecting friends.

This isn't just for kids.

Turn a playing card into a mini deck of cards, Cute routine and it's easy to do!

‘Whacked!’ is not just another book-test to add to your collection. It is a fully developed, 10 minute mind-reading routine. Includes manuscript and DVD.

Super Triple Double Face Coin Eisenhower Dollar With DVD gives you more examples of amazing visual effects of coin magic! Being one of the best visual effect coin gimmicks, its various effects are suitable for any situations such as Party Magic, Stage Magic, and close-up.

In this DVD more and more wonderful procedures are...

A Brass box is displayed with a hole in the cover, and inside the box are a number of coins. A spectator is asked to remove the coins but is unable to do so. The cover revolves freely on the box but cannot be removed. Only you can do it. The box can hold a US Half-dollar coin. Comes packed in a cute little velvet bag for easy storage and...

The mentalist predicts the dominant desire of the spectator. For this experience the presenter uses some cards with the possible desires, a transparent envelope holding these cards and a whiteboard marker. The drawn prediction on the back of the envelope matches with the picture on the card chosen by the spectator.

"Bannon and Montier hit the trifecta... 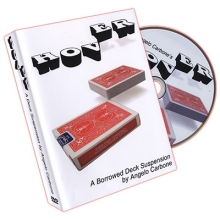 Borrow a deck of cards which you remove from the case.  The deck is placed on top of the card case.
Without touching the deck at all you slowly remove the case from under the deck until it no longer supports it. The cards are just flowing in mid air. The top card is removed to pass under the floating deck to proved there...

It is also the latest gimmick from Johnny Wong 2011.

It enables any performer to perform a highest level magic trick by only using simple and basic skills.
The DVD includes previous instructions from Super triple coin and Johnny Wong's...