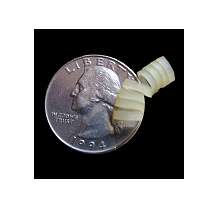 
One of the most amazing close-up effects has always been the coin in the bottle. Many magicians have built their reputation on this trick alone. Magician borrows a coin and an empty bottle. With the spectator holding the bottle, you apparently knock the borrowed coin right through the bottom of the bottle. After everyone has...

Performer displays a black bag approximately 8"x10" in size. In a flash it transforms into a large American flag about 36" long and 22" wide which can be shown on both sides. The performer could place a couple of silks into the bag (say Red, White and Blue), or any other similar items (for example his gloves) which vanish with the bag,...

This bag has one extra compartment, making three in one. A prop for changing, producing or vanishing any small object.


Invented by the great magician Burling Hull in the early 20th Century, the Mene Tekel Deck has not often been seen in the last several decades.

Now, this devilishly clever deck is back! An entire new generation is creating new effects with this old workhorse of a gaff. As easy to use as a Svengali Deck, but with a diverse catalog...

Four English Pennies are borrowed from the audience and held in the Magician's left hand. The coins then travel, one coin at a time, from the left hand to the right hand.

Our standard juggling rings come in bright fluorescent colors. Glow under UV light, but look very sweet under regular light. These rings are preferred by professional jugglers all over the world. Tough polypropylene in bright colours with soft smooth edges. Stretched Coin - Half Dollar by Tango