The performer walks on to stage with a cane. He places the tip of the cane into a cup on the floor, and instantly the cane transforms into a pair of inverted parasols, to form an attractive and off-beat display stand. Subsequently the performer uses this stand to hold his production and other items like card productions, silks, ropes and...

In The News - Tenyo

Here’s a baffling trick that you can do at a party or on stage. Take a few pages of a newspaper from your pocket, make a pouch out of the pages, and pour a glass of water into it. Unfold the paper and the water is gone. Then pour the water out of the folded paper again! Pages are shown on all sides.

Comes with a prepared Japanese...

Same as the Living Latex Dove, but a canary instead. These are mostly used by magicians in the "Vanishing Bird Cage" effect.

The canaries are bright yellow with glass eyes, and made out latex.

This is one effect that no birthday party entertainer should be without - it's simply a fabulous year 'round routine with some fantastic eye-catching magic. Announce that you are going to bake a cake, and display a handkerchief with a picture of a mixing bowl and spoon. The handkerchief is placed inside a change bag, and when...

Based on the "Masterpiece Forgery" which has been long off the market. This new version is entertaining and baffling, and easy to carry in the wallet supplied, You show the spectators several masterpieces of art printed on playing card stock. One of the paintings is the famous Mona Lisa. – After showing all four paintings you point out...

A.K.A. lycopodium powder. When squirted through an open flame, this fine powder creates a jet of fire. The flame burns very clean.

There are many effects that can be done with this box. The box has five compartments so that it can hold 5 Mini Candy Bars (not included). You can show the box empty and then produce a Mini Candy Bar. Show it empty again and produce a 2nd and so on until you’ve produced all 5 Mini Candy Bars. Place 5 different Mini Bars in front of spectator...

The magician shows the picture of a very beautiful dove on the trees to the spectators. In a blink, the real dove surprisingly will appear in magician's hand and is shown vanished from the frame.

The item is made of high quality material with a very interesting design and beautiful picture.

The magician displays a small cabinet with doors front and top. The front door is opened and the interior of the cabinet shown to be unmistakably empty.

The cabinet is then placed...

Haiku
A haiku is a form of codified poetry that appeared in Japan during the second half of the seventeenth century. It consists of a very short text, usually three lines, describing an image, a landscape, an emotion, a feeling...

THE GRAIL GOLD EDITION - WHAT IS IT?
THE DEFINITIVE WORK ON MIKE ROSES'S CLASSIC

A number of years ago, a thoroughly likeable fellow by the name of MIKE ROSE blew everyone with the BEST card at any number ever seen.

THE GRAIL has COMPLETELY FOOLED many of the BEST minds in magic - even those that you...

A spectator is asked to sign a totally unprepared newspaper right off the newsstand. The magician then takes the paper and rips it to shreds. He crumples...

A playing card is torn up and reformed before their eyes !

You show 4 torn pieces of the same card, which you place on the table or in a spectators hand. You say that last night in a bar, someone tried to show you a magic trick, and here's the result: 4 torn-up pieces of a card.

You hold the card box and place...

The Divining Rod
by Allen Zingg and Blaine Harris

Peter Marucci, the clever and very creative Canadian performer of a diverse blend of magic and mentalism, shared a brilliant approach to the neo-classic "Hot Rod". Not your father's "Hot Rod" any longer, Peter suggested an approach that gives this... 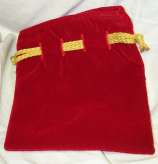 This innocent looking bag is a great a utility item used for vanishing, producing, switching, or transforming objects.Many tricks require a way to switch objects and this quality prop is the perfect solution. Made of plush velvet by Ickle Pickle Products. Colors vary.