The performer places the four Aces from a miniature deck into four different places in the deck which is then placed in a long stem Crystal Wine Glass. A handkerchief is passed over the glass, and one of the Aces is seen to have "floated" to the face of the deck. The Ace is replaced into the deck. This is repeated thrice, and the other...

Open this leather billfold and flames shoot out! You can even pull out money after the flames die down. Looks like a regular wallet. Crafted from fine leather.

POSSIBLY THE MOST AMAZING "THINK OF A CARD" METHOD IN YEARS!

"If you are seeking the holy grail of truly prop-less mentalism then you NEED to get this routine. Ben's thinking has always been unique and here he excels himself!"
- Marc Paul (UK)


The magician displays a large (11.5-inches round) aluminum pan and opens it, showing the inside empty. He places the lid back on, snaps his fingers and when he removes the lid again, a live rabbit (or any other object which fits inside) appears! 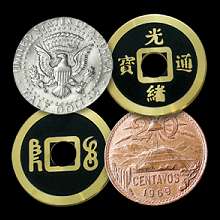