ONLY ONE PREDICTION. A DECK OF "PHOTO-CARDS", TWO OR MORE SPECTATORS AND... AN IMAGINARY AND AMAZING TRIP! THIS IS TRAVEL AROUND THE WORLD! THE SPECTATORS CAN FREELY SHUFFLE THE "PHOTO-CARDS" AS MUCH AS THEY WANT AND, IN THE END, THE PREDICTION WILL MATCH 100% THE FINAL DESTINATION OF THE TRIP WITH AN INCREDIBLE DOUBLE ENDING! A LOT... 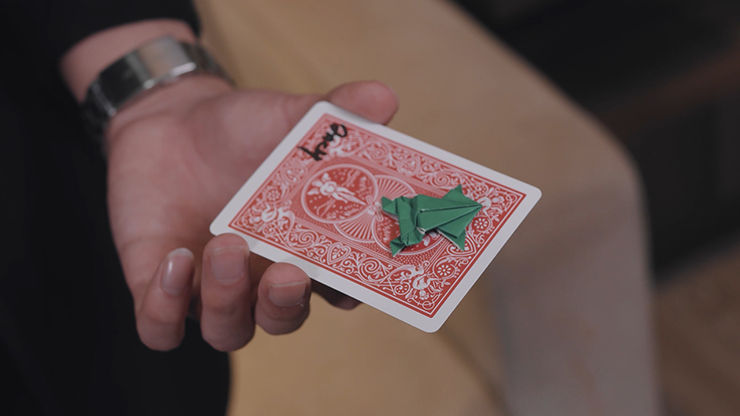 Manipulate ink drawing on a card is a staple in magic. However, this is unlike anything you had seen before. It is CGI level magic in real life.
From the mind of Sultan Orazaly, we are proud to introduce you "Memo Card".

Sharpie thru Quarter (1 Side) by Tango

A new concept to replace the traditional Cigarette thru coin.
The sharpie gives you many easier options to perform this classic solid-thru-solid routine.

As always Tango Magic make this coin in the best quality and includes a tutorial video to show you the new handling.

Don't smoke, use Sharpie Thru Coin.

Three One dollar size coins in just one coin. You can make appear and disappear in a very easy way one Copper coin, one Ike coin and one Chinese coin. The TUC coin was awarded FISM...

Three words that describe the effect.

Select a music from your smartphone.

Paste a different color or shape on your thumbs.

You will remove your jacket and show it from both sides.

The Entering Balloon or Giant Balloon measures 86 inches (160cm) when ventilated. It can be used in presentation for any age, when you enter the balloon you can act according to your wishes, you can dance, Jump walk. in easy way.

It is good to use with music and you will be follow by music.

Based on an idea by Tang Ho Chuang and Fantasio, Quique Marduk introduces OSMOSILK, the most visual "Silk through Glass" effect.

A regular silk penetrates the solid bottom of a borrowed transparent glass in full view. You even can see the silk passing thru the glass!

At the end, EVERYTHING can be examined by the spectators,...

The magician draws attention to an opaque tube resting on a black base.

There are three balls (red,yellow & green from the top) printed on the front side of the tube. After lifting this opaque tube he reveals that another tube is still resting on the stand. This tube is smaller & transparent containing three plastic balls resembling...

Kane's Variant is our first re-issue of Peter Kane's amazing material, and it's a 20 page booklet that features a completely baffling principle and several original routines using it!

Check out the video for a straight...

The performer shows a cutout of cloud. The door of the cloud is opened and a disc representing sun/ moon is found. The performer then displays an empty double compartment case, with two cloud painted doors on front. The sun is removed from the cutout and placed inside one compartment of the case. The doors are closed. The case is tilted,...

The Stretching Queen by Peter Kane, Racherbaumer, Castilon and Johnson

This is a beautifully clean handling to Peter Kane's brilliant Elongated Lady effect.

You begin by removing three cards from your deck. The Queen of Hearts and the two black nines. All the cards are cleanly shown as you place the...


Like a parallel universe, P-Case creates a parallel space in a normal card case. With this space, you can create endless possibilities. Like Schrodinger's cat, you never know what will happen until you open the case.

The MOST VISUAL cube solve on the planet!

After the stunning release of his Venom Cube, Henry now introduces his unique instant solve system: RD INSTA. With absolutely NO MOVEMENTS at all, you INSTANTLY SOLVE a mixed up cube like CGI EFFECT (You have to see it to believe it!). It is so visual that you will swear the stickers...

Signing is a very cute magic. When the audience sees such an object, they will think it is a souvenir, but the magician's hand can bend the logo, and even play with many different effects, which will make the audience feel refreshed.

It is a good magic prop that has no sense of props and is easy to carry and perform.

The Poker Museum is a stunning TRIPLE REVELATION with NO sleights!

Involve up to 3 spectators with this amazing effect.

Take a deck out of your pocket. Inside are forty-nine different playing cards from various decks. They have different faces and backs.

The spectators choose their selected cards from the random...

The Wand To Ball is improved by JL Magic and Magicat. It is well made and easy to perform.

Your audience will be stunned by this amazing effects, instantly conveying that you are, indeed, a real magician!