A visual routine with 2 strong climax ! You can perform at the table or in the hands of a spectator.

Phase 1: four double blank cards transform into four colored cards, one by one.

Collector's ESP Die is truly a masterpiece that you and your audience will love.

Every Collector's ESP Die is made with top quality walnut, perfect for the performer and collector.

Imagine being able to determine a person's thought-of shape with 100% accuracy. There are no electronics, no peeking....

An instant 4 card back and forth change that requires zero skills.

Rich Li, an underground genius, is sharing one of his most visual yet easiest effect of all time.

Untruth by Rich Li can be one of your most versatile tool to include in your professional repertoire.

Any 4 cards can instantly turn into 4 cards...

Fade Out by Sultan Orazaly

Fade Out by Sultan Orazaly Magic is a treasure worth finding.

But in order to find something, it must first be lost.

And we believe to have found what we're looking for.

From the brilliant mind of our friend in Kazakishtan, Sultan Orazaly, we bring youFade Out; a direct and visual approach to finding your spectators...

The magician shows 3 closed paper bags on the table, he puts an egg into a fourth bag and the bags are mixed up.

The magician invites a spectator to find out where the bag with the egg is, by pointing to any bag (no forcings, no magician's choice,...

U Box the best card case created by Edouard Boulanger and Jeremie Josi.

During one of our meetings Jeremie presented me with a card case offering many possibilities. For my part, I had developed for several years a case with multiple functions. Two completely different but complementary principles. We decided to merge our cases...

SHINE was a great effect, now 2.0 version is even better.

Magician is able to control a light bulb to light up without even touching it.

Now with this version, you can control SHINE to light up 3 different colors; red, green & blue, and it's super bright!
Simple yet efficient and elegant, it's...

A close look at the gorgeous Classic back design from Expert Playing Card Co. will quickly bring you to a level of complete mastery over these fantastic playing cards.

These innocent looking poker size cards are made to perfection and will handle like your favorite deck of playing cards all while cleverly concealing a hidden secret,...

Wayne revisits a routine he put on the market in 2011, a version of the Three Object Test, in which three objects are lined up on the table, one is freely selected, whereupon you show your prediction (in full view throughout) is correct.

Seated at the table the performer invites a spectator to sit opposite him and assist in a straight-forward...

Looking for a fun piece of mind reading magic to add to your act? What about nostalgia? Anime? Pok�mon? Well with this book test you can have it all! The best part? You can customize this test to use your favorite Books right off of your shelves!

Nokey is an ingenious method that allows for the fairest "thought of card" ever conceived.

Imagine handing a deck of cards to a spectator to shuffle over-hand face up. They shuffle through the deck once, remember whatever card they happen to shuffle to the face of the deck and then shuffle again - all whilst you are turned...

After a long time performing "Silkeny," I further refined the routine and created an improved version called "Silkeny 2.0" which is the culmination of many years of work.

A silk handkerchief keeps changing color, as the magician supposedly explains the secret. The magic keeps coming, with...

Unlocked is a special app that makes your lock screen an ingenious and undetectable way to get information from your spectator.

You will be able to give your spectator the ability to unlock your phone.

You will also be able to reveal personal information about your spectator...

Show an elegant long stem wine glass, fill it with water, cover it with a coaster and turn it upside down. Remove your hand and the coaster, and the water remain suspended inside the glass! At your command, the water falls out!

They all shout, "Do it again! Do it again!" So you do it again, this time with real red wine! (or any liquid)

Through The Ranks by Chris Webb

A visual card through deck which melts through cards like never before!

A signed card freely chosen is inserted into the top of the deck and visually melts down passing every single card and even seeing a few cards flutter by and of course this is their signed card.

A perfect ending for any ambitious card routine.

CAP IT by Twister Magic - Green

Vanish any small object from the audience, like a ring, coin, bill, signed card or any other small item. Show a bottle of soda, water or juice of any kind and give to the spectator to hold. Now invite him to open the "factory sealed" bottle to realize that after pouring all the liquid out the item have magically re-appear inside.

The Champagne Supernova breathes new life into a classic close up illusion.

Matthew Wright has been secretly working on this effect for ten years and is finally ready to share it with the magic world.

An easy-to-do miracle that allows you to push a Sharpie pen straight through the middle of a borrowed signed coin....

Award-winning, international entertainer, Menny Lindenfeld, is back with another truly mesmerizing and powerful visual effect.

TORNIMATION is the MOST POWERFUL Torn and Restored effect you'll ever perform! You tear a card, heal it back together in an impossible way, then... 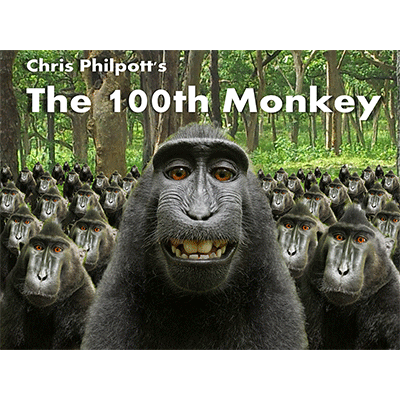 "The 100th Monkey is not just a method; it's an adventure! You're going to want to run with these simian secrets." - Max Maven

"Revolutionary ideas that soon will be the standard for all mentalists who want to go that extra step for something that feels real enough to be impossible. The most valuable part of the 100th...

Back Off by Tom Lauten

This routine combines two classic card magic routines and makes them obtainable to the beginner by eliminating difficult sleight of hand. "Back Off" is a blend of the "All Backs Routine" and "Triumph." Although totally different in methodology from the originals, the effect of "Back Off" is still similar to that of the original routines....