This gimmicked shaker makes vanishing salt easy without any sleights.Simply turn the shaker upside down as if pouring the salt in your hand. The audience can see the shaker emptying but when the hand is opened it is completely empty. A high quality trick.

This funny-looking tie will get you laughs! It is a visual built-in comedy prop so all you have to...

These cards have been marked using a special kind of juice formula. These cards are great for magic tricks and can be seen, by you, from up to 15 feet away. These cards are hard to read and you have to train your eyes to be able to read them. It can take anywhere from an hour to a week to learn to see these markings. Since they are so hard...


Defy anyone to spot the marks on these cards. Only a few people in the country will know what to look for. Perhaps the best marking system used by cheats today. Excellent for an expose on gambling. Professionally marked. Sold for entertainment purposes only. Complete with instructions by Dr. X.

You ask someone to NAME A CARD. No forces. You show that THE DECK IS COMPLETELY BLANK EXCEPT FOR THE NAMED CARD. It's that simple and it looks that good. The handling is totally self-working and can be learned in minutes, but this is no amateur-magic fad. Professionals are flocking to Holy Blank because it offers a rare, simple, MEMORABLE...

Open the lid and a snake pops out. This is a stack of five U.S. quarters joined together by a pivot pin.

This stack will work great in a Cap and Pence routine.

You will be able to perform many coin tricks with this gimmick.

Bite Out Half - Internal TANGO

The magician shows a coin, bites it and removes a piece. He then opens his mouth and shows the piece in between his teeth! He then puts the coin back in his mouth and returns it to its original state!

With this revolutionary "internal" design the mechanism is concealed inside the coin.

A card is selected and returned to the deck. The deck is placed inside a glass and slowly it begins to rise from the pack. One of the all time classics of card magic. This is the most popular version of all Rising Card gimmicks.

The magician removes a playing card from his pocket and leaves it face down on the table as a prediction. A card is then selected from the pack (let's say the six of clubs), but when the magician's prediction is turned over, it is found to be the ace of spades! The magician suggests that the audience, "take a closer look at the...

Make objects appear, disappear, or exchange one for another. This deluxe silk devils hank has two pockets. An improved design prevents sagging. Two small buttons stitched in the top corners help you locate the right ones. Use it for bill or card in lemon effects, deck switching and more!

Great new style! This set can be shown on both sides! yes that's right you can show both sides of the coins as you make them appear! Get them before they disappear.

Part 1: The magician shows two chinese coins (regular size) and says that in China "less is more". He puts one of the coins in his pocket, clearly... 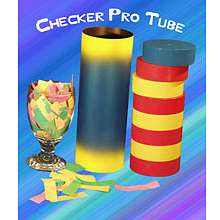 Remove the blue checker from your pocket.

Now remove the top red and yellow checkers from top of stack, and place... 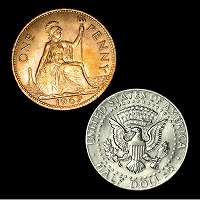 The Sun and Moon coin is an Expanded English Penny Shell and a copper/silver insert. With this gimmick you can do vanishes and transpositions. Many routines are possible. This is intended for the advanced coinworker.