The magician shows a 50 cent euro coin and a card, then he hits the coin with the card and the coin changes to a euro coin. He gives the coin to be examined to the audience. 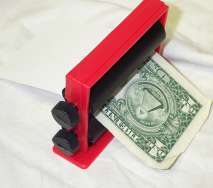 With the Royal Magic Money Maker, you can do just that. Or reverse the process, taking the ink completely off a bill and turning it into a piece of plain, white paper.

The audience sees the magician take a piece of plain white paper and run it through the money maker. As the paper... 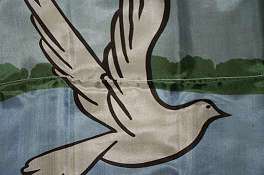 The perform displays a 15 inch black & white silk containing the image of a dove.

While holding the silk from two corners the magician waves the silk up and down and it visibly changes into a colorful silk. 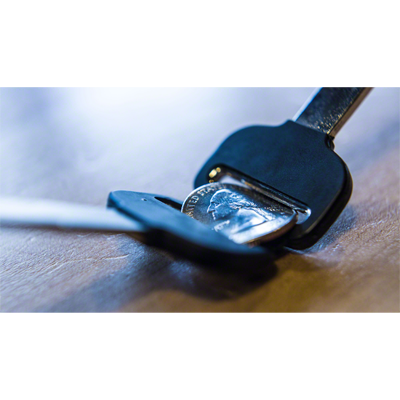 There are fewer joyful moments from a spectator when they open their hand and witness a hard, metal coin warped and bent right in their hand. Even better, the astonishment they have when they see you easily bending a coin at the fingertips, like soft butter.

Bending a coin to pull off a great coin-bending magic trick has historically...

A signed playing card through a bill!

The brilliant evolution of Deep Astonishment

THEIR FAVORITE WORD IS INSIDE YOUR CLEAR WALLET!

A window-ID-wallet VISIBLY holding a small packet of cards is placed on the table.

This is David Solomon's favorite packet trick. It has multiple climaxes and easy patter possibilities.

A blank Bicycle card is placed aside. Four Jokers are shown to have blank backs. One by one the magician prints colorful backs on them. After all four backs are printed, the magician magically causes all of the Joker faces...

When you mention tricks created by Jerry Andrus, several classics of magic come to mind: his Linking Safety Pins, Andrus Card Control, his classic coin routine, Miser's Miracle are but three. None are more famous, amazing, or popular as his Zone Zero. This routine is...

Back in 1995, Gordon Bean released The Limited Edition in conjunction with Larry Jennings. Spurred by a prime-time performance by Harry Anderson, it quickly became a best-seller. Eugene Burger and Br. John Hamman were among those who worked out their own versions, and the effect went on to become a modern classic: After the spectator thinks...

Now you can perform the classic multiplying rabbit routine with a wonderful new set of sponge bunnies from Goshman. Tan in color with brown ears and spots.

Comes with 5 "baby" rabbits and 3 "adult" rabbits with instructions written by Michael Ammar. 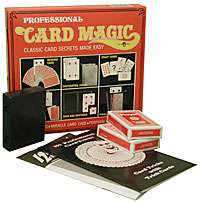 Want to become a master of cards? This is the magic set for you!

Designed by professional magicians, this magic set is the perfect introduction to card magic. It inlcudes:

If you could only see this performed live! 1-100 Bill Switch is one of the cleanest, most magical bill switches you will ever see (and one of the easiest). It's well explained with four pages of text and pictures. A classic of magic that should be in the performing repertoire of every magician.

Here's a quick visual trick that really gets their attention.

A genuine U.S. Dollar Bill is shown. You begin folding it and suddenly the bill is gone and you are holding a pack of matces! You can show the matchbook front and back and there is nothing to conceal in your hands.

This booklet teaches one of the most astonishing, startling, visual tricks in all of magic.

Imagine this:
Borrow a dollar bill.
Crumple it into a loose ball.
Set it on your open palm.
Slowly, eerily and mysteriously, the bill rises off of your hand!

The secret of this incredible feat is described in detail...

This little kit comes with instructions plus everything you need to perform the Floating Bill. You also get instructions on a Coin Matrix and a PSI effect where a pencil mysteriously rolls across a table.

A blank piece of paper is placed into the wooden tray. The blotter is then rolled over the tray transforming the blank paper into genuine currency. Any bill may be produced.. And it's completely examinable.

Made of quality hardwoods. This is a collectable quailty prop that you will thoroughly enjoy!

Casually show a butcher style knife, gleaming blade in full view. Roll up ashirt sleeve and then with one swift movement smash the blade down on yourforearm. NO TRICKY MOVES! The blade has penetrated completely through your arm, living flesh sticking to it's edge. The shock begins. Blood squirtson the blade, forearm, table and floor....

You reach out and pluck the flame from a cigarette lighter. Hold the flame between your right thumb and index finger, then you transfer it to your left fingers. Take it again with you right fingers and finally blow the flame vanishing it and showing your hands absolutely empty . Use it to light a cigarette or ignite flash paper. Blow... 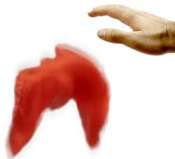 Create your own reality

Are you ready to impress your audience and get more bookings? If yes, we have the answer for you!

This is a new effect created by Luca Volpe and Renato Cotini.

It's totally different from all products in magic and mentalism because it is customized to your personal business card...