A specially printed set of JUMBO ESP Symbols supplied in deck form. There are 5 symbols per set, and five sets per deck, making up each 25 card deck.

In addition to the traditional symbols, each card is printed with a subtly marked back, allowing for demonstrations of super-human, extra-sensory power demonstrations. Instructions...


Penn and Teller's hit show Fool Us had a simple premise: perform an effect that the duo couldn't figure out. Only two magicians fooled Penn & Teller in the initial show, and one of those was John Archer. He did so with a smart, simple routine called "Blank Night," and Vanishing Inc. Magic is proud to release it.

Here's an effect that excites audiences!

Your spectator first selects an item on the table, or selects a card. Then, the spectator can transmit through their mind, and the pointer instantly points to the item or card that they selected. The pointer will stop at a certain position during the movement, and then open precisely...

Magic and mindreading in one great effect!

Show 5 picture cards to your spectator - ask them to remember one of them in their mind. Remove one card from the group of cards. Show the remaining cards, and the thought-of card is gone! Show the card that was removed earlier - it is now totally blank! Their thought-of card has truly disappeared!...

The ultimate Which Hand effect + the ultimate Kurotsuke Effect just got better and BIGGER! Now as a Stage Version!
All needed props included! The included balls have a diameter of 24mm.

The gimmick is 50% stronger than the close-up version.

X-Ray STAGE VERSION is DOUBLE the range compared to the standard...

Designed to create a lasting and powerful impression no matter where you are or who you're with. Created and field tested by Joshua Jay with artwork by Ben Harris, these effects have been printed on ultra thin but durable card stock which will easily fit in virtually ANY wallet you now carry. Each effect comes complete with a detailed...

A Coin on Cord effect where an English Penny with Hole is threaded onto a velvet cord -- penetrates completely through! Coin can be examined and is repeated once again However there is a twist!... After coin in threaded through the English Penny has now changed to a gold wedding ring!

A spectator freely selects and signs a card.

You shuffle their card back into the deck then place the cards into a walnut box.

Suddenly the lids open all by itself and a card begins to rise.

The card descends back into the box then all the cards start shooting out several...

This effect is highly visual and surprising. It is perfect for stage magic and is completely angle-proof.

Effect:
The magician is seen holding a large picture frame with a beautiful picture of a dove sitting on a tree branch. The magician holds the frame with his left hand with the picture facing the audience. He makes a...

Love is an eternal topic that spans all regions, races, ages and artistic fields. The ring represents the permanent commitment between lovers.

This is Wayne's take on the classic Diary Card effect.

As ever, he has routined it to be SUPER-SIMPLE to perform:

Not only is it a strong effect, but the Houdini theme is intriguing and memorable....

Pads that look totally innocent, yet will force the name of a movie and astound your spectator!

Why worry about filling in your favorite SvenPad for your next gig?

Pads that look totally innocent, yet will force the name of a destination and astound your spectator!

Why worry about filling in your favorite SvenPad for your next gig?

Salt poured into one hand vanishes and is reproduced in the other hand.

From the mind of Eric Jones and Mr. Tango, a new concept of a gaffed coin that is sure to fool everybody. This a new version of the old Karate coin, a Chinese coin whereby the hole magically opens to let a finger go through it! Easy to perform, with the quality you've come to expect from Tango Magic.

Here is an excellent apparatus to change liquid into a solid object. The performer shows a metal vase. This is shown to be empty. A glass of water/any liquid is poured in the vase. This is now covered with an empty cylinder which the audience clearly has seen right through. Next, making magical passes the performer lifts away the cylinder...

A single dollar bill is shown in the box and immediately, with no covering, is visibly transformed into a full chest of bills.

The box can be shown Empty before the bills are made to appear.

Perfect for any type of show and the perfect ending to any money routine! Measures...

A tall, clear plastic cylinder is freely shown and three 18 inch silks are let down inside the cylinder as shown. A cover, open at both ends, is then slid down over the cylinder. When the cover is removed, the silks have changed to three REAL ORANGES which can be tossed to the audience. The cylinder can be shown empty at both ends,...

The two glasses are stacked one on top of the other with the solid plastic square between them.

Milk or any other liquid is poured into the upper glass and the liquid remains there as expected. The glasses are now briefly covered with a silk or any such... 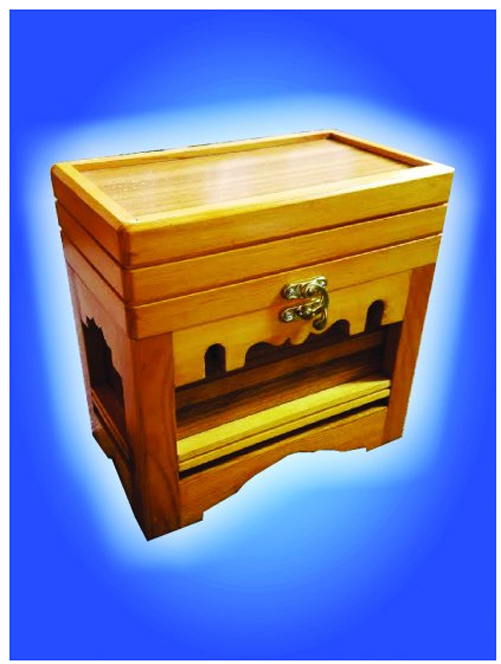 A wooden chest is shown all round to be solid from all sides. A spectator is requested to place any of his belongings into the chest, and close the lid, while you are facing the other way. After the chest is closed, you turn around and take back the chest from them. Holding the chest in both your hands, saying some magic words, you immediately...

A beautiful glowing thread for the classic "Gypsy Thread" effect! Break the thread into many pieces, and the pieces magically are restored back into one long thread.

This thread breaks easily - not painful for your hands! Used with a hidden ultraviolet lamp inside your suit, this amazing glowing effect delivers a mysterious yet beautiful...