Silver. Made of aluminum.

Magician appears on stage with a black cane. All of a sudden the cane becomes animated and dances to the music with the magician. Up, and down and around it goes without the magician even touching it.
32 inches Long, Breaks in half for easy transport. Used in McBride Stage Video's.

Day At The Circus

You can vanish an elephant! Three cards (7 x 10 inch) are shown. Depicted on the cards area Ringmaster, a dancing horse, and an elephant. All three a placed in an envelope that represents a circus tent. Now for the vanish. The Ringmaster and Dancing Horse are removedand the magician claims the elephant has vanished. As the the kids are...

$22.50
A Brilliant Device Which Allows You To Imperceptibly Switch Decks Easily

" With Deck Switcher the magician has an elegant solution for one of the cardman's most important problems - how to imperceptibly switch a deck. Fantasio's mechanical deck switch is easy to do, safe in operation and impossible...

$18.50
Any Named Card Appears Under A Spectator's Hand!

The spectator simply names any card that they like. The magician removes a deck of cards, and claims he will make the named selection vanish from the deck. Spreading out the deck, however all of the cards are seen to be missing the faces. Offering to try...

You show the audience a set of various zoo animals on flash cards. Two spectators stand up in the audience and think of any one of the animals as you show them all of the cards. Picking upa blank card and a felt-tip marker, you attempt to read the minds of the spectators and draw a quick sketch. You place your predictions on a card stand,...

The basic effect is the standard. Borrow a ring, coin or key and wrap it in a handkerchief and cause it to vanish. You then introduce a 2" square Walnut box that is locked with a hasp and small padlock. Spectator unlocks the box to find their ring inside.

A precision made box for vanishing coins. Spectator drops a coin into the box. The box is shaken so the spectator can hear the coin rattling inside. In an instant the rattling stops and the coin vanishes. The box may be carefully examined without revealing the secret!

Spectator names a card only to find it has a different color back from the rest of the pack.Another spectator names a different card, but wait a minute! The deck has changed color and thesecond thought-of card has an odd colored back! Then ...the faces of the cards change from all red to all black then back to normal again! There's...

All wood and metal with a beautiful green and gold design. Magician places a die into box with 4 doors - 2 in front, 2 on top. He claims die has "vanished" as the box is tilted and one of the doors opened (audience hears the die sliding in the box). Magician keeps tilting the box back and forth, opening one door at a time. By this time...

This is Fast, Visual Magic at its Very Best!

A large wooden tray and a large die are shown. The die is thrown onto the tray where it visibly & instantly changesinto a ball!

The tray measures 12 inches square and is made of hard wood. The die could also be transformed into silks or other objects.

The tray is fully...

A pack of cards is give a little squeeze and it shrinks to by 25%. This is repeated 4 timesuntil the deck is only a quarter of an inch tall. Not for beginners.

You first demonstrate the sharpness of the blade by cutting a carrot in both the top hole and the wrist hole. Your victim spectator now puts their hand through the wrist hole. A carrot is placed in the top and bottom holes making them very nervous! Now you push Disecto's steel blade...

A regular size penny triples in size then visibly inflates to a GIANT 3 inch penny. You getall the props plus detailed instructions. Not recommended for beginners. 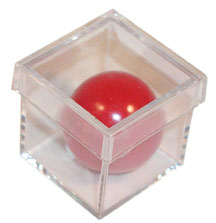 You remove the two jokers from the deck and place them off to one side of the table. The spectator now selects a card from the deck and memorizes it. The selection is now placed openly into the center of the deck. The magician snaps his fingers and turns the top card over. Lo and behold, itiis the selected card! But it isn't there.......

The magician asks an audience member to borrow a dollar and a quarter. Placing the quarter on top of the bill, the performer starts rubbing in a circular motion, as if to rub the quarter through the bill and even the table. The magician stops and removes his fingers from the bill to reveal that...

This small device enables the performer to pluck lit matches from his lapel or pocket.Holds two matches. Made of high quality stainless steel.

From a blue card case, you start to remove a RED card deck! No moves at all, the card deck visually changes to BLUE! Show the entire card deck to be BLUE! The spectator names any card. You remove this card from the deck, and place it in their hand. They turn the card over, it's the only RED card in the deck!

A bag with a zipper bottom is shown. Magician opens the zipper and sticks his arm completely through the bag to prove it's empty. The zipper is closed and th magician reaches and removesa live bird.

The Dove to Silk Mat has always had a great reaction from any audience.
Effect: The magician shows an elegant mat on both sides like a banner, he then produces a dove from any method he chooses and places the dove into the folds of the mat, now as the mat is popped open the dove has visibly changed into a white silk handkerchief....

Picture yourself standing in front of your audience holding a large tray containing a balloon.Suddenly the balloon bursts and in it's place is a live dove. The tray is 14 inches square.

Watch eyes pop as you perform this visually stunning trick!

The magician shows his audience an old magic trick with an oversized domino. First, the two-sided domino has one spot on it. The other side has four. But when the magician turns the domino over again, it is shown to have three spots on one side and six on the other.