Watch eyes pop as you perform this visually stunning trick!

The magician shows his audience an old magic trick with an oversized domino. First, the two-sided domino has one spot on it. The other side has four. But when the magician turns the domino over again, it is shown to have three spots on one side and six on the other.

Spectator shuffles his own deck of cards and then makes a selection. He immediately opens the prediction and it matches their card! The Prediciton is on the table the entire time and is never touched by the magician. Everything can be examined. Easy to do!

High quality brass magic! The basic effect is as follows: The magician displays a two brass caps and a brass ring. He places the cap in the ring and a stack of quarters magically appears! The quarters travel from one cap to the other, penetrate through the solid brass, then vanish completely! Precision made.

You display a regular size soda bottle which the audience can see clearly through. Removing the cap, you caution the audience not to blink as they are about to witness the inexplicable. Instantly, you throw the cap into the bottle, penetrating matter through matter. One second it's on the outside, and the next second it's trapped... 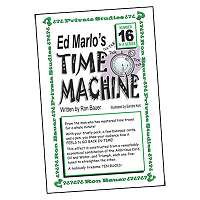 With Your trusty pack, a few business cards and a pen, you show your audience how it feels to go back in time!

This effect is constructed from remarkably economical combination of the ambitious card, oil and water, and triumph, each one fine-tuned to strengthen the other.

This effect is extremely simple to perform, very effective, and appropriate for any type of show.

There are three clear tumblers each covered by a different colored cover. Two spectators freely select two of the tumblers leaving you with the third. There is no force and they can change their minds as often as they wish. The... 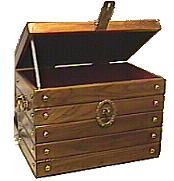 This is the classic "tip over production box" and is superbly hand craftedto resemble a pirate's treasure chest. With this prop you can open the lid,tilt the box forward to show the audience it's empty, then produce a smallanimal or whatever else you desire. The box is 15 inches wide and 10 inches tall.


The magician has a spectator select and sign a card on the face. He/she explains that they will slice through the center of the card so that he/she can show the "inside" of the selection. After a magic gesture, the selection splits in half, leaving a card signed on the face with a blank back, and a card with a blank face and a normal...

Borrow a 50 cent Euro and an empty bottle. While the spectator holds the bottle you apparently knock the borrowed coin right through the glass. The coin is clearly inside the bottle! You shake the coin out and pass everything out forexamination. Audiences are amazed by this trick.

A 50 cent Euro and a 5 cent Euro are shown in your hand. Close your hand and when you open it again the 5 cent coin is gone! You can make it reappear from any location you want.

The Scotch & Soda is the greatest coin trick ever created.

Magician displays a mug full of milk or other liquid. A piece of newspaper is rolled into a cone.The magician then pours the liquid into the paper. The paper is crushed or opened and the liquid is gone!

Use any newspaper. The Milk Jug does all the work.

Magician shows a glass full of liquid (milk, cola, etc..) He drinks until the glass is almost empty then covers the glass for a moment. After removing the cover the glass is once again full. Can be repeated as often as desired.

Spirit Slates for the discerning performer, Dave Powell's Exotic Slates are handcrafted with care from only the finest materials and built to last.

The performer displays two old-fashioned chalkboard slates which are blank on both sides. He rubberbands the two slates together and places a small piece of chalk in between them....

This is an improved version of the classic pocket guillotine. The see through plastic and metal blade make the penetration through the finger seemingly impossible, and to top it off, the guillotine can be inspected. The sharpness of the blade is demonstrated by first cutting a vegetable or cigarette. It cuts cleanly but when the spectators...

This gadget will deliver a candle-like flame on your command, over and over before refilling. Requires lighter fluid (not included). 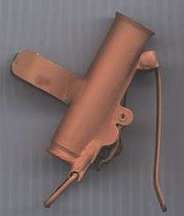 An incredible device that will allow the performer to shoot a ball of fire 10 feet into the air while producing a loud bang, all at your fingertips.

Imagine pointing across the stage and firing a ball of fire toward an empty box only to have a rabbit or dove or even your assistant appear.

Imagine firing a ball of fire across... 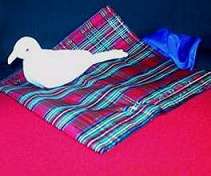 The performer begins by placing a small white silk hank into a beautiful bag. He then sets the contents on fire, flames shooting upwards from the opening of the bag. The fire is extinguished and the bag pulled open revealing the interior,and out flies a real live dove.

Can be used to vanish or exchange other objects in the fire.... 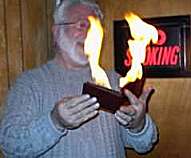 Jerry Palmer has spent many months and labored over countless prototypes to provide us with the most Professional Fire Wallet ever designed. This is a real working pro's wallet, designed to give years of service. No expense has been spared. Made from the finest and most supple leather available. Every wallet is hand tooled and hand...

A red backed deck of cards is removed from a blue card box. Instantly the box changes to RED!The change is very fast and happens in plain view. 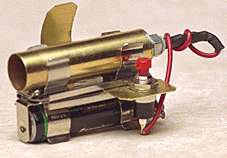 
The performer enters the stage, hands seemingly empty , and then - WHAM! - suddenly a flash is seen streaking out of his hand, erupting into a brilliant ball of fire. Shoots 10 - 15 feet. This fantastic little gun is small enough to conceal in your hand, yet creates an astoundingly large effect. Requires Flash Paper, Flash Cotton, and... 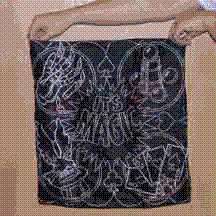 The performer displays a black silk, printed with a design in white (like a photograph negative). The performer shakes the silk in the cascading confetti, and the silk is found to be completely colored in many bright attractive colors. It is again displayed clearly, stretched flat between the hands on both sides. We supply you with special...

Vanish a silk in mid-air

Display a silk and a magic wand. The silk is tossed in the air. You wave the wand at the silk and it INSTANTLY and very VISUALLY vanishes into thin air!

Can be performed surrounded and in short sleeves.

Specially gimmicked 16" mechanical wand does the work.
The wand...

A spectator is offered two books. No force! The books can be completely examined. The performer holds the book so he cannot see the front and riffles through the pages until the spectator calls STOP. Any page can be selected! The spectator is asked to look at the first word on their chosen page. Once this is done the book is closed and...

A match is placed across a playing card. At the magicians command the match rises and floats above the card. Another card is passed under the match to prove it is floating. The match then floats down and rests on the card.