The key word here is precision. You'll fool yourself with this beautifully made piece of magic. All of the standard transpositions and penetrations are possible including this classic: Spectator holds his hand in a fist with his thumb pointing straight up. A handkerchief is spread over his hand and the solid brass ring is placed over...

The Jo Pro Coin Box comes with a gimmicked coin box, a gimmicked half dollar and a gimmicked card. When used together you can perform some of the cleanest transpositions, penetrations, vanishes and productions you could imagine. The gimmicks do most the work so you don't have to be as proficient in coin box handling as you would with...


This beautifully crafted metal coin is amazingly accurate in every detail. Impressive scale and color make this coin a must-have for all Coin Magicians and coin collectors as well! They have a brilliant finish.
These are not real silver.

This is an economical Jumbo Coin. Made of aluminum but very accurate in detail. This coin is not real silver.

Imagine having an ink pen come to life right in your hands!

The Royal Magic Jumping Pen does just that. It rises from your clenched fist, it jumps out of your hand and gyrates in a variety of strange directions.

Lethal Tender is a set of coins (half dollar and Chinese coin) with a playing card in a neat plastic case. With these items, fantastic transformations take place. The card is waived over the half dollar and it instantly changes to a Chinese coin!

No sleight of hand required! Anyone can do this right away!

A deck with a hole drilled all the way thru the pack is shown. As the magician riffles thru the pack the spectator is asked to call "STOP" at any time they like. They are asked to remember the chosen card and are immediately handed the deck to hold. The magician then inserts a padlock through the hole to lock all the cards together.... 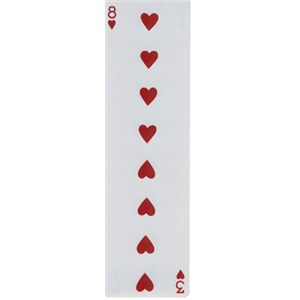 A playing card is chosen and shown to the audience. The magician explains that he has a duplicate of the same card in his pocket. He starts to pull the card from his pocket but it appears to be the wrong one! However, as he continues to remove the cards, it seems to grow in length, proving to be the correct card after all. The Long Card...

Imagine having complete control over your necktie as it levitates, lowers, and animates at your command. With absolutely no apparent movement of your body, you can cause any necktie to move up and down magically. Seeing it will delight and surprise people around you...it grabs their attention! They will laugh and ask, Hey, how do you... 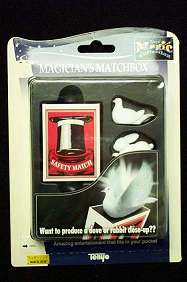 Has anyone ever asked you to produce a rabbit on the spot? Now you can!
You show a small matchbox. One side of the box has a drawing of a giftbox. The giftbox is closed and sealed with a ribbon.You remove a match from the matchbox and wave it like a magic wand. Suddenly, a small rabbit figurine appears on top of the matchbox!
You...

An egg vanishes and is re-produced from examined empty bag.