In effect, the performer shows four Aces. The Ace of Spades the master Ace is openly turned face down. Now, one by one, after the packet is twisted,ďż˝ the other three Aces turn face down. When the cards are dealt face up, there are now five cards a Royal Flush!

Magician selects a prediction card from a deck and lays it aside. From a different deck magician holds cards up one at a time and asks a spectator to stop at any point. The audience can see that every card matches the prediction, except for the spectator who is seated behind the performer.Once the spectator makes a selection he is asked...

A spectator selects a card from a shuffled deck. Free choice. No force. Remove two cards from the card box and explain that these two cards have been treated with special chemicals that can "actually melt and dissolve other playing cards!"Show all three cards on both sides. They appear to be regular Bicycle poker-size cards.Take the two... 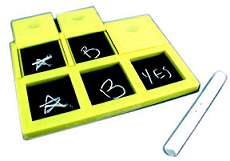 Three examples of mind reading in one!

The magician shows a board with six spaces for writing. He writes down a prediction and covers it up. A spectator writestheir response underneath the performers prediction. This is done 3 times. At the end the predictions are uncovered and they match exactly what the spectators had wrote.

A mental miracle suitable for stage, close-up, and even the phone or internet!

The magician asks a spectator to think of an object from a printed list. The selection process is extremely fair. Yet, even before the spectator makes her selection, the magician knows what object she is destined to pick! This is thought reading...

Performer pours liquid into a magazine. The magician turn the magazine completely over and flips through the pages. The liquid is gone!
Whenever the magician desires he can pour the liquid back out of the magazine.

Finally there's a large size Milk Pitcher which is more suitable for larger venues. This model stands 9 inches tall. Easy to fill. Made of sturdy plastic.

NEW AND IMPROVED: Mind Power Deck is now manufactured by the U.S. Playing Card Company in red Bicycle Rider backs. But we didn't stop there - other important features have been added, making this the best mind reading deck on the planet!

Spread a deck of cards face up on the table and ask a spectator to look at any card. No one...

This item was first introduced over a hundred years ago and is still popular today. The bird cage is hand-crafted in brass, and plated in a gleaming silver finish. You can produce several of these bird cages from a standard production prop. In their collapsed stage, each cage occupies a space of less than 5" square and two and half inches... 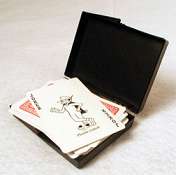 Hundreds of magical miracles are possible with this prop!

Imagine being able to change any card into any other card - with no sleight of hand! How about making a torn card become whole again? Causing a spectator's message to become imprinted with a special message from the magician?

The Miracle Card Case allows you to...


A professional Mirror Glass. Genuine "Mikasa" crystal with a sealed in mirror to safely separate the liquid compartment from the dry compartment. The glass can be shown empty, covered with a handkerchief and then shown to be full of liquid. You can also use it transform liquid in into silk(s). The intricate cuts of the crystal...

This is a quick routine using four cards that appear to be all the same, then magically transform to look the same on both sides and finally all four cards are shown to have mirror faces--It’s all done with mirrors--Of course.

Includes a relaxed, humorous presentation and can be performed with a freely selected and signed card. Comes...

This model is in the form of a crystal Wine Glass, an attractive and seemingly innocent accessory. The wine glass design makes the switch possible by just twirling the stem between your fingers, as you wave your hand in front.

Some amazing transformation effects can be done with a mirror glass like visibly and instantly changing...

Four quarters of an ordinary playing card are cleanly displayed. The pieces are taped together in a mis-made fashion (2 diagonal pieces are face up, the other two are face down). The taped card is then wrapped in "magic paper" and given to a spectator to hold. A moment later, the tape is removed and the pieces are shown to have fused together...

The magician shows two decks of cards in their boxes, one red, one blue. He has a deck selected and in an instant the box disappears living only the cards in his hand. The box is removed from his pocket.

Next he shows the cards blue cards front and back and tosses them onto the table. Instantly their backs change to red!

Show a small tray containing a few coins then have someone count them. Nowyou dump the coins out and when they count them again there are more! Amazing! Happens right in front of their eyes.

Three different color mummies and a coffin are shown. A spectator is instructed to select a mummy and place it in the coffin. The other two mummies are to be hidden. All of this is done while the magician has his back turned or is in another room. The performer is then able to reveal the color of the mummy without ever touching... 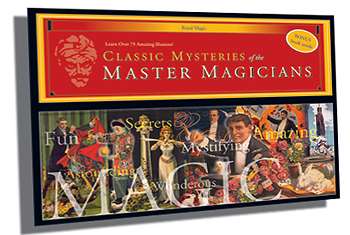 Mysteries Of The Master Magicians - SET

This set was designed by professionals to teach the basic principles of magic. With practice and the special apparatus it is possible to duplicate tricks of the Master Magicians. Learnto perform the illusion of the Oriental Rice Bowls, Floating Prayer Vase, the incrediblePenetration Frame, Houdini's Chain Escape, the Cups and Balls...

Five envelopes, each one containing a different sheet of newspaper, are displayed. A spectator selects one of the envelopes and the sheet inside. The magician tears the selected sheet into dozens of tiny squares.

Then the magician asks the spectator to choose one of the pieces at random (there's no force!), and to read the news...

A pair of doves, a small rabbit, or other livestock is placed in this handsomely decorated box.

The box is taken apart piece by piece to show the livestock has completely vanished. They think it's in the base, so you fold this flat - the bird is really gone.

Made from plywood, attractively painted, this makes a big...

A deck is introduced with the name of a person written on the back of every card. Two predictions are handed out, whereupon the magician accurately divines...