The performer walks on to the stage. His hands are clearly empty. The hands are brought together and when openedthere is a large bouquet of spring flowers.

These Spring Flowers are made of mylar and are much more flexible and better lasting than normal flowers. When folded they occupy very nominal place, yet when produced they...

Imagine asking a spectator to think of any number. You write a prediction on the back of your business card. When they say their number, you turn over your card and it matches. Every time! Does magic get any more direct than this?

Now you can predict a spectator's freely thought of name, number, date, age - even the amount of...

After forcing a card on a spectator you remove a jumbo (4 x 6) card from an envelope. You show the card and ask if this was their selected card. It won't match but you explain it is a "Switch Card". Turn the card so the back faces the audience and they see a light switch attachedto the card. Ask them to name their card and when they...

A card is selected and shuffled back into the deck. The performer displays a wooden frame withw ith two sheets of glass rubber banded together. The pack of cards is tossed at the frame and instantly the selected card appears BETWEEN the sheets of glass.

A great site gag for clowns or magicians. Wear it like a regular watch. When you need a laugh just pull out the tape measure and say "It's five inches past two". A click of the button, and as the tape flies back you can say, "My, how time flies!" Measures in both inches and centimeters.

From this 1 quart metal tea pot you pour up to 20 drinks. Each one is a DIFFERENT color! You then remove the lid from the pot and remove silks and streamers. The colored drinks are poured back in the kettle. You pour from the kettle again and this time only clear water comes out. Originated by U.F. Grant silks not included ... 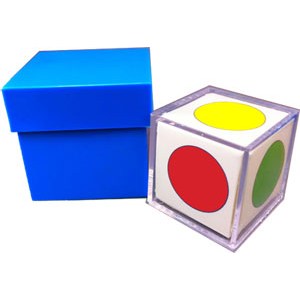 A large die with a different color spot on each side is shown. A spectator is asked to place the die inside a solid box and remember which color is facing up. He is then asked to place the lid on the box. This is all done with the performers back turned. The magician then takes the box behind his back for a moment and when it brings it...

The magician shows four blue-backed jokers. One after another, in front of the audiences eyes, the jokers become red-backed. Then as their jaws drop, the magician changes all four jokers back to blue-backed cards! This amazingly visual routine comes complete with the necessary cards. 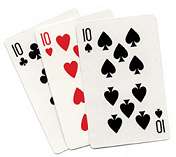 The magician displays three cards. One is red, and the other two are black. A spectator is asked to try and keep track of the red card after the group is flipped over and mixed. No matter how hard they try, the spectators never can find the red card - because it vanishes from the group as soon as the cards are mixed! 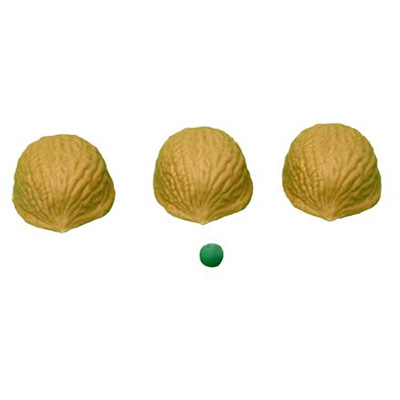 A magician's thumb tip that creates a quick flash of fire.
Requires Flash Cotton (not included).

With Trixie Bond's Topsy-Popsy Wand you'll get squeals and screams of laughter, guaranteed! Just give the 16" by 2" wand a squeeze and one of the ends pops off, creating even more pandemonium! When you pick up the end and place it back on, the other end pops off!

Guaranteed laughs from kids and adults, easy to...

Magician is seen holding a full sized white rose. He places some glitter on the rose and passes his hand in front of the flower. It magically changes into a red rose. 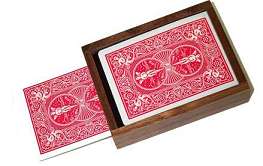 The last word in book tests! If you thought the original Flashback was great ... wait until you see the ultimate version. Included are four new and examinable paperback novels. Plus a copy of an unprepared Webster's Dictionary. And a fifth paperback designed exclusively to perform the "Hoy Book Test" without having to...

Many customers have asked Sean over the years to make a MANUAL version of his Ultimate Sketch Pad. Well, here it is! This MANUAL version is a great option for those who want to perform this great effect, without the electronics. We have also included our improved mouth movement which really adds to the illusion!


This holder is designed to be opened with just one hand. It is the simplest holder you will ever use. Each individual holder is hand made.

You fan out six cards to show three face-up Fours and three face-down cards. The cards are turned over and re-fanned to show three Tens. An unknown” card is removed from your pocket and inserted into the fan. You now deal the Fours face down to a spectator while you hold the Tens and the unknown” card. Your cards are squared, turned end-over-end...