The performer displays a clear glass "playing card" that he claims can trap thought impressions, or the "ghost of the selected card"! A card is selected by a spectator from a deck. He is asked to concentrate on his card, and the impression of the card mysteriously appears on the glass in a ghostly fashion, then vanishes, leaving the glass...

Performer is seen holding an ordinary face down deck of cards. With an empty hand, the performer covers the deck. After a few seconds, the performer removes his empty hand from the deck. The deck has shrunk to half its size!!! This mini deck is now spread both face down and face up showing it to be quite ordinary. The mini deck can now... 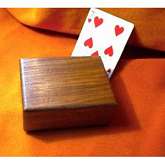 
Invented by the great magician Burling Hull in the early 20th Century, the Mene Tekel Deck has not often been seen in the last several decades.

Now, this devilishly clever deck is back! An entire new generation is creating new effects with this old workhorse of a gaff. As easy to use as a Svengali Deck, but with a diverse catalog...

The "Hit" effect at both SAM and IBM conventions this year. Formally only sold in Europe it is now available in Phoenix backs- After the deck is shown to be well shuffled. the magician explains that he is going to present a miracle that was performed by a famous one-armed magician. To demonstrate he places his right hand in his pocket....

A spectator chooses a playing card and is asked to hide it behind their back.

Now get another volunteer (or use the entire audience) to assist you. Show the wand and explain you will either give them X-Ray vision or that you wand is actually an X-Ray machine. Place the wand in front of the spectator and let gravity unroll the...

2 Basic Gimmicks and approximately 10 Ft of Thread for Hawk 2.0.

No Lucky Cards or Instructions included.

Based on the "Masterpiece Forgery" which has been long off the market. This new version is entertaining and baffling, and easy to carry in the wallet supplied, You show the spectators several masterpieces of art printed on playing card stock. One of the paintings is the famous Mona Lisa. – After showing all four paintings you point out...

THE GRAIL GOLD EDITION - WHAT IS IT?
THE DEFINITIVE WORK ON MIKE ROSES'S CLASSIC

A number of years ago, a thoroughly likeable fellow by the name of MIKE ROSE blew everyone with the BEST card at any number ever seen.

THE GRAIL has COMPLETELY FOOLED many of the BEST minds in magic - even those that you...

A playing card is torn up and reformed before their eyes !

You show 4 torn pieces of the same card, which you place on the table or in a spectators hand. You say that last night in a bar, someone tried to show you a magic trick, and here's the result: 4 torn-up pieces of a card.

You hold the card box and place...

This is a very useful and versatile apparatus used for making a playing card appear, vanish, or change from one card to another. You can also use it to make a prediction. A blank piece of paper can change to one with a prediction written on it. It's use is only limited by your imagination.

Comes with both the Japanese and...

You explain to your audience that a magician is obligated to perform whenever called upon. In fact, it's part of the rules. You show...

A card visually transforms into the spectator's chosen card by heating it with a normal lighter!