The Social Deck by Soma

"There is truly no filler on the DVD: every routine is practical, and tested. The tricks...

Let's bring on this new effect from Olivier Pont! If you're ready to be a completely different person, this is for you! Be ready to change the outcome of any situation thrown at you!

Borrow a bill, roll it, and turn it into a cigarette in the blink of an eye. Imagine the climax of an Ambitious Card...

The magician hands out a "mini-pen," about half the length of a normal pen and explains that there are ways to make it bigger. One is with a magnifying glass; the other is to stretch it. Holding the pen between his hands, the magician starts to visibly stretch the pen until it's the normal size! The pen may then be handed out for examination....

Miraculous magic that has shocked the world!

You won't believe your eyes, even if you stare at this brilliant idea created by Jeimin. His ingenious effect has baffled audiences around the world. Tenyo has obtained permission from the creator to release this trick, with new touches that make it easier to perform.

Silk Through Card 2.0 by Aaron Smith

The spectator selects a card and examines it thoroughly. A clever routine secretly brings the special duplicate card into play. The magician impales the card with an 18-inch silk right in front of the spectator’s eyes! Two spectators each hold one end of the silk, tug-of-war style, while the magician slides the card back and forth; proving... 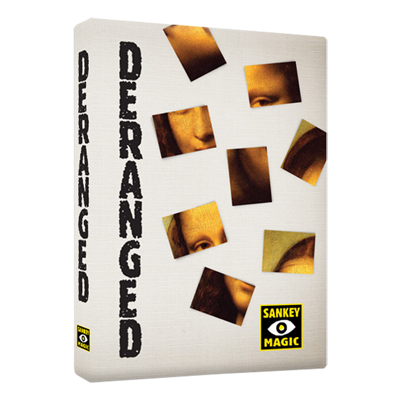 Eight pieces of a cut postcard (featuring Leonardo da Vinci's 'Mona Lisa') are handed out to be closely examined.

A spectator selects one of the pieces. And a folded prediction is introduced.

A spectator is asked to hold the remaining pieces behind her back and give them the 'ultimate fair shuffle' (mixing...

Your eyes will pop when you first hold the enclosed props in your hand. The precision gimmicks and unique principle is stunning, even to seasoned magicians. You will be able to visually make the corner of a chocolate bar disappear and reappear on a different colored chocolate bar! At the finish,...

The printing press of your dreams!

Rub a blank sheet of paper, and instantly transform it into a genuine currency note! With the enclosed prop, you can apparently print money without any effort at all. Yes, the money at the end of this trick is real. A pocket printing press that your audiences will admire with envy and delight!

What more could you ask for? Misled was created by FISM award-winning inventor Timothy Wenk and performed exactly as described in this booklet by David Copperfield on international television!

A $100 bill and (in most cases) a pencil are borrowed from a member of the audience. The borrowed bill may be marked...

SNAPPED by Justin Flom and The Other Brothers

From the minds of Justin Flom and The Other Brothers, SNAPPED is a brand new utility device that allows for spectacular visual vanishes. With no slights...