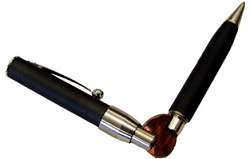 
The Python Pen looks like an ordinary pen but the special gimmick built inside will allow it to EASILY bend a coin.

Comes with handling tips so you can learn to bend coins right in front of your spectators.

This is a very well machined gimmick that will amaze you!

A nut, bolt, key, lock and napkin are presented. A spectator is asked to remove his or her ring and place it around the bolt. The nut is screwed onto the bolt, trapping the ring. A lock is placed through the hole at the end of the bolt, which now traps the nut. The spectator then covers the performer's hands holding the trapped ring....


Magic Ring Master is a fantastic assortment of ring magic; penetrating through your hand, jumping from hand to hand, completely vanishing, reappearing & finally melting away. Ben Salinas will perform and teach you Ring Master, the Ultimate Finger Ring Effect. You will also learn several other bonus effects to take your ring magic... 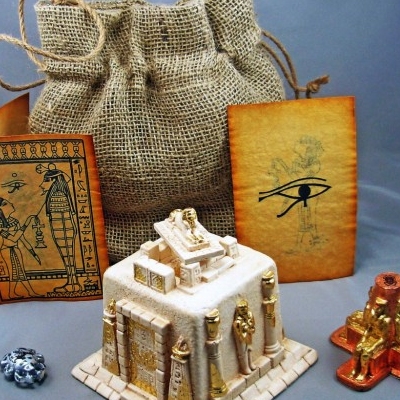 Secret of the Sacred Scarab

A Sacred Scarab magically appears from within a flat Parchment only to later vanish from inside a sealed temple. The temple's perched Sphinx is then seen to vanish and transport itself through space only to reappear at a distance. The Scarab repeatedly vanishes from where ever it is placed only to reappear elsewhere where only seconds...

Made from reinforced parachute material, the famous magic knot effect popularized by Slydini can now be yours! Two silks are tied together by a strong knot. The knot is examined by your spectators and then you can instantly make the knot dissolve.

The rabbits vanish from one hand and reappear in the other hand, and then multiply!

Easy to learn and perform.


Two rings are borrowed from two spectators and trapped on a pencil with the magician's ring. The three rings become linked together on the pencil. Then they are magically unlinked and all rings and pencils are handed out for inspection. All of this is done trapped on a pencil being held at both ends by the spectators.

This is fantastic! A solid nail is placed inside a soft rubber tube. Slowly it begins to bend.You straighten it back out and pass it out for examination. No switches or difficult sleights.The gimmick in undetectable.

No matter you are a veteran magician or a new comer, you are able to perform a lot of amazing magic tricks with only simple manipulation of this gimmick.

Of course, if you are a big fan of coin magic, just put in a little...

Fold a blank piece of paper in half, then into quarters and finally into eighth's. Without any moves, sleights, thumb tips, etc... the blank piece of paper VISUALLY turns into a $20 bill!. The $20 is unfolded and shown on BOTH SIDES. Somethings wrong this is only photocopy of a $20.
Again fold the photocopy in half, quarters...