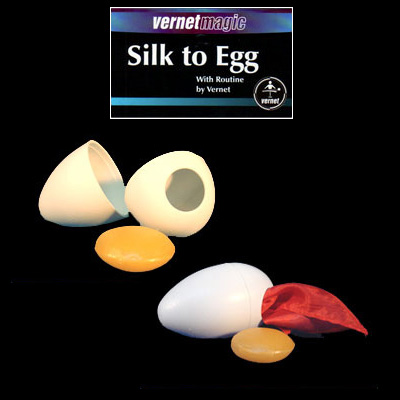 Magician pushes a silk into his fist and when he opens his hand the silk has turned intoan egg. You offer to show how the trick is done by revealing that the egg is hollow and allyou've done is pushed the silk inside the egg. Now that they know how it's done you crack theegg on the side of a glass and let them see the yolk and white...


You begin with an empty tube resting on a table. A small flower is dropped into the tube. When the tube is lifted the flower has transformed into a large bouquet that is larger that the tube itself. Made from aluminum with cloth flowers.
Small - 10 inches tall
Jumbo - 13 inches tall

Cups and Drinks by Lucian

Differing from the conventional water vanishing routine,"Cups and Drinks" can make liquid disappear and reappear without any chemical substances used in the process.

Thus, you can demonstrate the magical effect unlimitedly according to your routine.
Besides, the principles and manipulation of "Cups and Drinks" are...

This is the only Egg Bag I will ever use."
- Bill Abbott

"This is now my closer."
- Bob Sheets

"With a degree in industrial design... 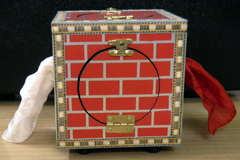 Performer displays a small 4.5" cubical box. He opens the doors on the front and top of the box, to show it is empty inside. A WHITE silk is now pushed through a hole on one side of the box. It emerges from a hole on the opposite side, dyed a completely different color, say RED. For a finale the magician opens the door on top again and... 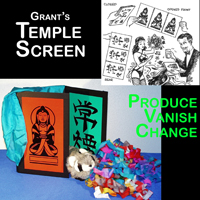 Mak Magic's original Temple Screen is the Best in the Business!
Show a 3-Fold hinged screen front and back.
You form the Screen into a Triangle, stand it on the table and pull out solid objects.
Massive amount of Silks and other objects can be produced.
Mak Magic's updated version has a built in Permanent...

AN AMAZING ILLUSION FOR THE SOLO PERFORMER

"When I saw Luis' original routine and method I was stunned. You really can't believe the control Luis has...

It's rare to find new, original and COMPLETE routines that are ready to add into your children's or stage repertoire.

This is a fantastic new routine with many cool twists and turns.

You begin by showing a crystal cube with a silk inside.
You magically extract the silk from the cube with an impossible penetration.
You...

The magician displays a red sponge ball and claims that he will actually make it disappear in front of the spectator's eyes. Slowly and methodically, he places the ball into his trouser pocket and claims, "It's gone!" After the groans have died down, he offers to do it again-this time for real. He places the ball on top of his...

The Magician brings out the two sparkling cylinders, one of which is red, and the other which is silver.
After that the magician shows the audience that both cylinders are empty, or so they think...
Here's where the Illusion begins and the Magician begins to amaze his audience exposing prop after prop from...

With this product you will amaze and shock your audience by turning an egg into a dove.
You will leave the audience wondering how you did it...

Two nails are apparently pushed through a 260 animal balloon. Once both nails are through, you can allow your audience to look through the tube so they can see both nails. The illusion is unbelievable. The nails are then removed and finally the balloon is removed. The tube, balloon and nails can be handed out for examination BEFORE and...


Several colorful silks are placed into the Crystal Silk Cylinder. The Cylinder is then covered with a yellow tube and then quickly removed, the silks have disappeared with the Cylinder now full of balls, candy or even live gold fish*.

This professional grade illusion is easy to perform and included are 3 twelve inch diagonal...

The dots on a big die's sides change, then the whole die vanishes!
The vanished die turns up in the magician's pocket.

The Magician shows a clear plastic sheet and in the blink of an eye, a bouquet of flowers appears in the window. The Magician rolls the window into a tube and produces a feather bouquet that seems to take a bow at the end!

Paul Harris Presents Lubor's Gift Created by Lubor Fiedler Manufactured by Alan Wong The Gift That Keeps on Giving! You open up a stamped shipping...

Splash Bottle is a gimmick that makes miracles possible. Created by Damien Vappereau and Jean Mark 16 years ago, David STONE uses Splash Bottle in his professional repertoire. It has earned him repeated standing ovations.

D'Lite is the best selling magic trick of all time. The newest version of D'lite is the "Dazzle". Dazzle looks stunning. It is bright red and the light strobes or flashes as it is lit. If you thought D'Lite got attention, wait till you see Dazzle!