A built-in version of the classic Pegasus Page that happens in your spectator's hands from beginning to end!

With the book in her hands, she remembers the page number she stopped at and thinks of a word on the page before closing the book.

After sharing a fun little time travel theory, your spectator opens the book to...

ON TIME by Juan Pablo

You have an image of a handless clock and ask someone form the audience to randomly choose an hour and minutes. You draw the hands with a marker on the clock, and immediately reveal that your prediction matches their selections!

A revolutionary multiple-out system that will...

Want to blow away your spectators with spectacular mentalism? Welcome to Mental Pen, a diabolical creation of Joao Miranda and Gustavo Sereno.

Mental Pen allows you to create REAL MAGIC. The kind of magic that gets into their...

A Credit Card for the Real Psychic

An amazing concept from the mind of Menny Lindenfeld: a credit card for the real psychic! They'll swear you're PSYCHIC!

Suggest a bet: let a spectator hide a banknote in one of a few UNMARKED envelopes. If you perform in a pub or restaurant, let him hide it under beer coasters,...

The Human Abacus by Sean Taylor and Richard Paddon

The Human Abacus is PERFECT for the parlor or stage performer.

From the minds of Sean Taylor and Richard Paddon, this brilliant effect is not only baffling and entertaining, but lends itself perfectly to either a serious or light-hearted presentation. Whichever way you go with it, the impact will be the same -- HUGE!

Most probably you have never ever seen such a mystical calendar. It looks ordinary but enables you to perform extraordinary magic. Let me present probably the world's first Psycalendar.

What you get is a specially printed table calendar, a set of pocket calendars and several calendars in different sizes to suit different...

WELCOME TO SVENPAD CELEBRITY PRESAGE. WE HONESTLY BELIEVE THIS IS THE GROOVIEST BOOK TEST TO BE RELEASED TO THE MAGIC FRATERNITY IN A DECADE! THIS IS NOT YOUR GRANDDAD'S BOOK TEST. IN FACT, THIS TOTALLY REALISTIC PAPERBACK OF CELEBRITY QUOTES & STORIES UTILIZES A POWERFUL SECRET METHOD, THE PERFECT PAGE NUMBERING SYSTEM, A DEVILISH...

The Mind Bag is the first change bag with a magnetic closure. It is an extremely stylish and versatile instrument, allowing you to perform extraordinary mind tricks in a clean and effective way.

The convenient magnetic closure will allow you to hide the secret compartment to which you have easy access when needed, without...

A great prediction effect that can be adapted to numerous situations!

Philip Ryan has been performing his postcard routine for many years. His routine combines two different gaffed postcards. This version uses SVENGALI postcards that have been specially designed to fit in your pocket. This can be performed close-up or on stage. 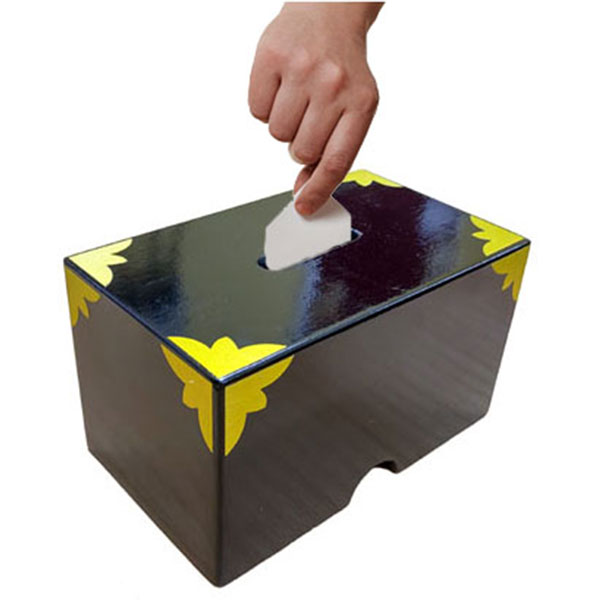 Place the cards face up on the table one by one. As you do so, ask someone in the audience to select a card by telling you to stop at any time they choose. The chosen card will in fact be the very card you have already predicted. This illusion of future prediction is a stunning magic trick that leaves a great impression.

The PK touch is one of mentalism's most powerful effects, where a spectator feels they're being touched while the performer is some distance away.

Now the performer can perform this effect standing up, using a 100% self-contained diabolical method, at a moment's notice, and at a distance...

**Please note this is the Lite version. It comes with the DVD and Crib ONLY and does NOT include the printed diary. The Lite version is perfect for anyone who would like to make their own diary in any language.

The Gordon Diary Trick is, in our opinion, the best diary effect ever. The great news is you can perform it with...