Predict Any Thing, Any Where, Any Time!

Like our regular sized Super Sharpie, this mini unit is a revolutionary redesign of mentalism's most potent weapon. It's so incredibly simple to use, you'll be performing mind boggling mental miracles just minutes after practicing with it.

The Chest of Nostradamus

The Chest of Nostradamus, was invented by Jos Denys of Belgium. This is a fabulous and diabolically clever prediction. No amount of examination of the chest or cards will reveal the unique and original method.

EFFECT: The mentalist shows a small wooden chest suspended from decorative chains. As it hangs from the performer's...

Here is an example of one routine:

The magician talks about his dream holiday and... 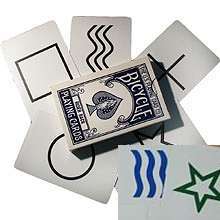 A Perfect Separation of the Living from the Dead

The performer is seated at a table opposite two volunteers. The performer places a small article in front of each person, such as an old coin and an old fountain pen (these are to act as 'markers').

The performer now takes out from his wallet,...

Let a spectator choose a card from a deck. Let him also write the name of the card on a slip of paper which is folded and attached under clip no 1. The next spectator is asked to think of a color which is written and folded under clip no 2. Continue in the same way with number 3 and 4, ask for an animal and a name. When all this is done...

Four brass coins with ESP-symbols are shown. A coin is choosen by a numbered spinwheel, no force needed! A spectator concentrates on the symbol of the chosen coin, as it magically appears on a "magic crystal", that has been in view the entire time.

Using this envelope, you can perform the effect of change. For example, a white paper change into a bill. The greatest merit of this is that the audience can put something in the envelope by themselves and pull it out by themselves.

The New Powell Micro Writer is perfect when you prefer an adhesive Boon-type nail writer for close-up or stage. The Micro Writer holds a replaceable pencil lead that be changed in seconds. You can perform mind boggling effects like revealing a thought of number or shape, predict the amount of change in someone's pocket, and much more!...

With Eduardo Kozuch's "Quick Addition," you will be able to perform just like a lightning calculator.

Removing three lists of numbers (from 100 to 1000) from your wallet and three envelopes, you invite three spectators to each select a number card and an envelope.

Because each envelope has two windows cut into it,...

Larry Becker is known for his creative genius and when it comes to props like this he's at his best.

The Chameleon Chest will allow you to answer a host of questions provided by the spectators. Imagine having them write 10-15 questions, dropping them in the chest and having one selected at random BY A SPECTATOR. You divine...

A specially printed set of JUMBO ESP Symbols supplied in deck form. There are 5 symbols per set, and five sets per deck, making up each 25 card deck.

In addition to the traditional symbols, each card is printed with a subtly marked back, allowing for demonstrations of super-human, extra-sensory power demonstrations. Instructions...

Big Bang is the ultimate demonstration of psychokinesis.

Place any ordinary lightbulb in a clear bag - completely sealing it off. From this point on you never touch the bulb, and spectators can clearly see the bulb and straight through the bag.

Concentrate all of your mental energy on the bulb – IT EXPLODES! This unexpected...

All the secrets fully explained behind several fantastic metal bending effects. All of them are easy to learn by watching the detailed DVD included.

Every metal effect has detailed presentation and method explained, step-by-step.

Magicbox is please to anounce the release of a revolutionary new Mentalism routine. It has long been said that the strongest effects are those which happen in the hands of the spectator, what if the effect could take place in the spectators mind? Between the Lines combines some revolutionary thinking with a...

This top quality mini size leather wallet has been specially designed for secretly revealing any information written on the back of a business card and then sealed inside its zippered pocket. Tony Curtis Magic is pleased to have exclusively supplied the leather wallet used in this effect in association with Wayne Dobson. 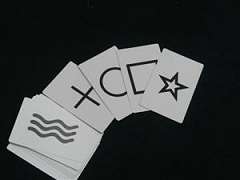 These cards have been designed at the Parapsychology Laboratory, Duke University, to test extrasensory perception. Optimal conditions are briefly summorized on the instruction sheet. Explained also are Psychological Conditions, Experimental Conditions, Basic Test Procedures and Evaluation, using the chart supplied. Most mentalists choose...