RE by Chris Webb

A selected playing card is torn into four pieces. Then with one piece at a time and the hands being shown cleanly at every phase the card repairs itself. The card is then handed out for examination.

With this self-contained gimmick you will be able to perform a visual four piece torn and restored card with ease. The gimmick can even... 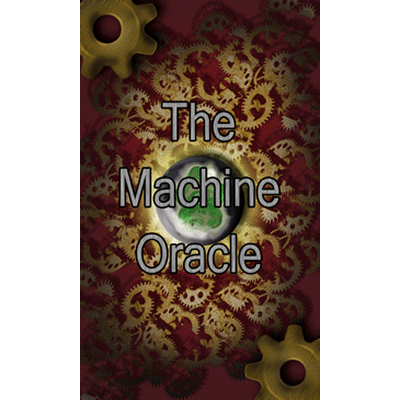 The Perfect way for Mentalists and Psychic Entertainers to add readings to their offerings and maintain it as JUST entertainment. A Unique product that you can also use with your favorite Bizzarre or mentalism routines AND which allows you a license to create as many decks, extra or special cards and more for your own use WITH...

Here are some incredible effects by MO that you can learn! These include:

hide and seek
Modern approach to back-off trick. One by one, cards turn face down, then face up, and then finally change into other cards!

whirl
Visual oil and water routine. Four black and red cards are mixed and then immediately...

Eddie McColl is one of magic's best kept secrets. This DVD features 9 superb routines that will blow your audience away, with material that you will use.

The bonus Toolbox Section also features in-depth training for some of Eddie's signature handlings on the moves used throughout this DVD.

"His methods are ingenious."...

This instructional magic training course will help even the most inexperienced magician shock their audience and spectators with classic money tricks such as the Torn & Restored Bill.

A borrowed bottle, a signed coin, mind-blowing coin in bottle!

Solid through solid is a classic premise in magic, Even in modern times, a simple coin through water bottle is still mind-blowing.John Stessel has found an amazing solution to this plot.

Borrow a coin and a water bottle and have both items initialed. Visually the...

A close look at the gorgeous Classic back design from Expert Playing Card Co. will quickly bring you to a level of complete mastery over these fantastic playing cards.

These innocent looking poker size cards are made to perfection and will handle like your favorite deck of playing cards all while cleverly concealing a hidden secret,...

Through The Ranks by Chris Webb

A visual card through deck which melts through cards like never before!

A signed card freely chosen is inserted into the top of the deck and visually melts down passing every single card and even seeing a few cards flutter by and of course this is their signed card.

A perfect ending for any ambitious card routine.

Award-winning, international entertainer, Menny Lindenfeld, is back with another truly mesmerizing and powerful visual effect.

TORNIMATION is the MOST POWERFUL Torn and Restored effect you'll ever perform! You tear a card, heal it back together in an impossible way, then...

If you thought number mentalism was about arithmetic, you don't know The Book of Numbers! In this, the second volume of the three volume set, Docc reveals his original creations as well as some genuinely concealed secrets of infamous spirit mediums. Of course, these too have Docc's twists. All are designed for intimate surroundings....

It hides in Shadows and Impersonates the Innocent

Frustrated with complicated billet peeks that are cleverer on the page than in the field? Tired of having to shove unfolded business cards in your wallet just to read them? Hate switching slips because it's so unnatural...

Back Off by Tom Lauten

This routine combines two classic card magic routines and makes them obtainable to the beginner by eliminating difficult sleight of hand. "Back Off" is a blend of the "All Backs Routine" and "Triumph." Although totally different in methodology from the originals, the effect of "Back Off" is still similar to that of the original routines....

Micro is a specially printed gimmick that allows you to visually and instantly change a full-size playing card into a mini card which can be shown on both sides. The gimmick also allows for a number of other magical effects such as shrinking an entire deck of cards into a mini deck of cards. The effect comes with a video tutorial...