For the first time ever, the mullet-haired maestro reveals some of the mentalist routines that have helped make him a house-hold name in his former Eastern-block homeland....

"Ross and Fraser are on the cutting edge with their Avant Garde approach to modern mentalism."
- Peter Turner

Rapture is Ross and Fraser's debut 2 DVD Disc Set containing some of their best work to date.

Featured are live performances and in-depth explanations of some of Ross and Fraser's favorite utility...

The Uri Geller Trilogy is an extraordinary LIMITED EDITION signed DVD collection.
For the FIRST TIME ever, you will get answers and revelations about his most personal and closely held... 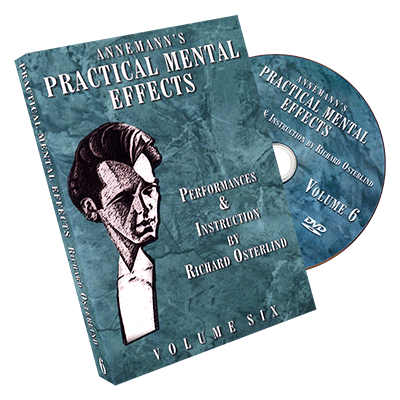 Richard Osterlind and Jim Sisti return to the same school and do it again, but with many amplified versions of other Practical Mental Effects material. For most of these routines, Richard changed the workings and methods slightly (or sometimes very significantly) to make the effects more direct and streamlined. You will love his thinking!...

You ask your spectator if they have read their horoscope and that you have a horoscope page, torn from a magazine, in your wallet. You tell them that each star sign has a lucky playing card; they then select a card. You take a prediction from inside your wallet that not only predicts their card, but also their star sign! On the magazine... 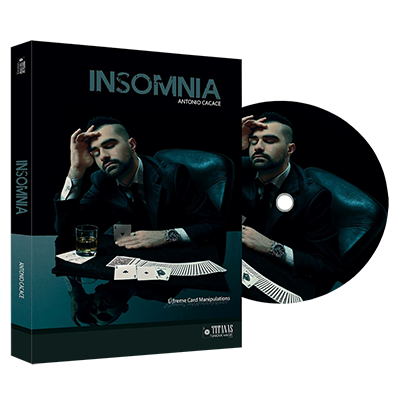 Get ready to stay up tonight, because your mind will be searching for answers! This is INSOMNIA by Antonio Cacace.

Quadrant: The selected card magically finds its way between the two Jokers that have been isolated under the magician's watch.

4/1: A crazy visual effect where the Aces fade in and out. 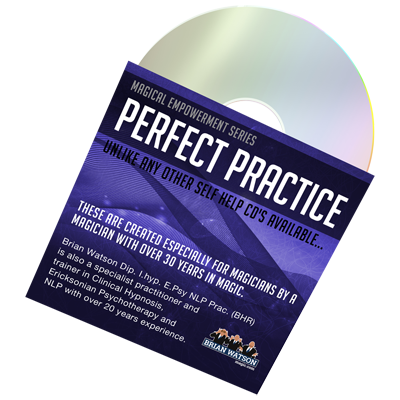 This is an audio CD
Brian Watson's Magical Empowerment Series are unlike any other self help CD's available. They are created by a magician, for magicians!

The Magical Empowerment series of CD's are crammed with over 20 years of knowledge in Ericksonian Psychotherapy and Hypnosis and over 30 years experience... 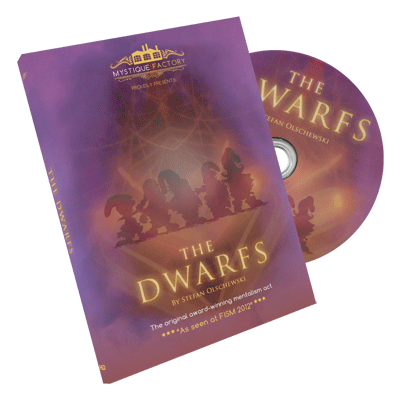 The Dwarfs by Stefan Olschewski

Get ready for "The Dwarfs"!

Experience one of the most baffling and entertaining mentalism routines out there. Stefan explains his complete FISM act in great detail - nothing is held back. Now you will be able to perform...

With Proteus, Phedon demonstrated the place propless methods hold in the way he views mentalism. With his new release, Sibyl, he now throws in what he calls the "Alpha and the Omega": Connecting with your sitter at a level never reached before.

Imagine touching someone's soul, using nothing but your words.... 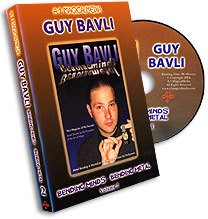 Not since Uri Geller has Israel produced such a dynamic performer! Guy Bavli is Israel's hottest magician, specializing in Mentalism and Metal Bending. Guy is a full- time professional, constantly performing on television both in the United States and abroad. Guy is also a three-time winner of the Israeli Gold Cup Award for Best Magician.... 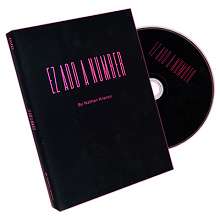 
The easiest Add A Number routine you will ever encounter.
Sacrificing NONE of the entertainment value.
FUNNY, ENTERTAINING and STRONG STAND UP MENTALISM!!! 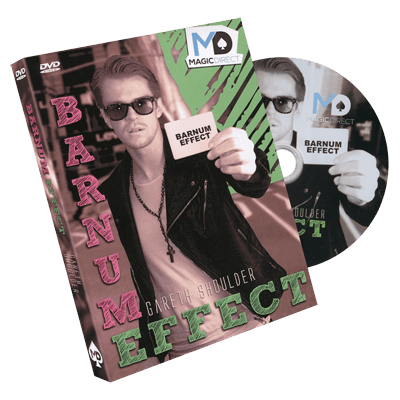 Barnum Effect: You place an envelope on the table and hand a spectator a stack of Flash Cards which can be openly shown. You ask the spectator to deal the Flash Cards face up until they choose to stop. You tell them to turn that card over and say the word or phrase that is on the flash card. You then immediately tip out the prediction... 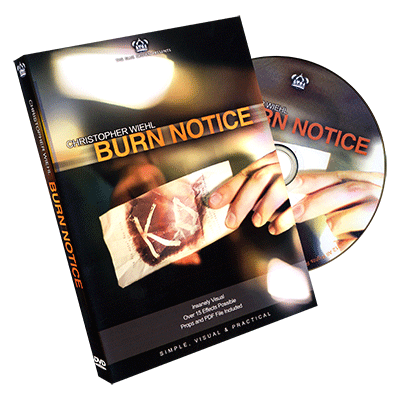 Burn Notice is a unique principle that allows you to reveal what a spectator is thinking with simple, everyday items. Your spectator thinks of a playing card, an object, or anything else. You pull a receipt out of your wallet, touch it to the flame of a lighter, and the spectator's thought instantly appears on the receipt!...

Morgan Strebler is back with the most creative and artistic metal-bending routine ever created. You must check out the video to experience this masterpiece.

Imagine not only bending a fork - how about miraculously twisting it into a virtually-unrecognizable shape having an artistic look? Spectators' eyes pop out! 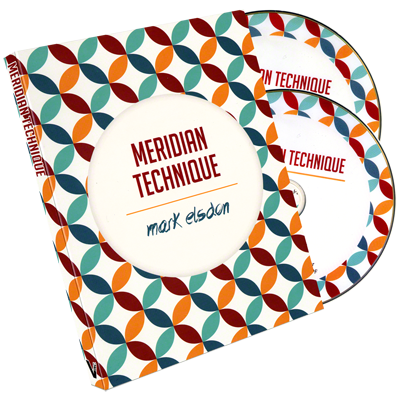 The basis of the technique is that you end each strolling performance with one parlor piece performed for...

ROGUE - Easy to Do Mentalism with Cards by Steven Palmer

ROGUE - Easy to Do Mentalism with Cards by Steven Palmer (BBM186)

On ROGUE Steven Palmer teaches you how to use a pack of cards to perform absolute miracles. With Steven's brilliant psychological chicanery and a handful of easily achievable moves you will be armed and ready to unleash... 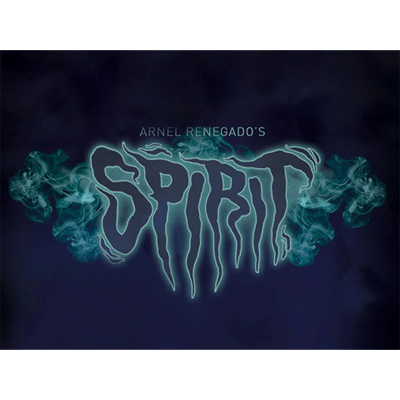 "DOMINATE THE POWER OF SPIRITS"
Ghosts are real.
You can control them.
They do what you tell them to.

Prepare yourself for the devious secret of Spirit!

Take an ordinary plastic bottle and show it to your spectators. They gather around you, to see something extraordinary. They want to witness you harnessing the power...

Finally a book test that you can perform with almost ANY book from a thriving, up and coming mentalist! On this DVD David Taylor shares with you the inner workings of this fantastic piece of mentalism. David has honed the routine over many performances in his professional act and once you learn the principle you will be able to apply it... 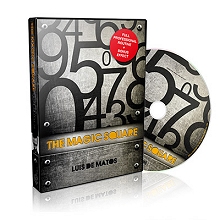 A professional Magic Square routine from the repertoire of Luis de Matos. Members of the audience call out numbers at random. Unbelievably, from these the performer is able to construct a perfect magic square. All the columns, rows, diagonals and corners add up to the same number. Not only that but this number was chosen by a spectator...

"With iKnow , you instantly divine a song the spectator has randomly chosen from your iPod or MP3 player! An incredible, impromptu trick that is ready to do-anytime!"

A spectator is invited to listen to as many songs as they'd like from your favorite playlist (a folder that contains a compilation of 60-70 songs)...

True Mysteries Lite is a DVD + eBook combo containing breakthrough principles which, when applied to your existing repertoire, elevate the magic you perform beyond the boundaries of what is considered possible without hypnosis.

Previously only available as an expensive limited-edition package and sold out in stores worldwide,...

Tony Corinda's landmark work, 13 Steps To Mentalism, is widely considered to be the mentalist's bible. In this comprehensive DVD series, modern-day master Richard Osterlind performs dynamic effects from each step of Corinda's...

Decoded by Morgan and West

This two-disc DVD set is unlike any you have experienced before. On Decoded, Morgan & West reveal the artistry behind their "code" act. You'll learn how to secretly communicate with an onstage partner to divine serial numbers, the value of pocket change, a randomly chosen word from a book, and much, much more. 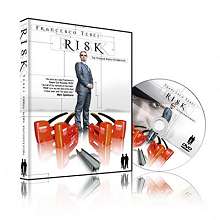 Destined to become a classic.

The roulette theme is hugely popular and RISK is one of the best available. Every aspect makes sense, everything is logical and above all else the method is so simple, yet has fooled some of the top names.

What makes RISK so good is that everything is within your control,...