"When it comes to anything and everything amazing with iPhones, you MUST explore the in-depth work of Michael Murray."
- Gregory Wilson

"I cannot recommend this enough, 'Perfect Opener' is one of the most genius and bold ideas I've read in a LONG time. Michael is the master when it comes to iPhone routines...

A collection of Notes from Daniel Garcia

Back again. And we've brought more great magic kicking and screaming with us.

Here's just some of the magic you will find in this volume:

Synchro-Nicety - A three-phase coincidence with cards by John Carey.

Dwindle Swindle - An amazing, and easy to do, impromptu card miracle by Cameron Francis.

Here's another treat for your audiences! Ron Bauer has just released #22 in his Private Studies series, "Jim Bergstrom's Hat Trick." It's an innovative, colorful comedy version of the Torn Tissue Papers to Hat that's a worthy feature effect for any close-up and stand-up adult audience. (It's not a kids' trick, but...

by Stewart James and Allan Slaight

Canadian Stewart James was the most prolific inventor of magic in the twentieth century. Where most magicians invent a handful of magic routines during the course of their life, Stewart James created over one thousand. His prodigious output has been recorded in two mammoth publications totally...

The Three Shell Game is a compilation of all the equipment, moves, and routines used by the shell game pros over the years. After you learn the basic moves, the book describes 32 different routines that will always keep you 3 steps ahead of any audience. The final section of the book describes the methods of "shills and sharpers". These...

A Compilation of Tricks and Effects with Wax

Wax is one of the magician's greatest secret gimmicks and this is the first booklet ever written on the subject. It was originally released in 1953 by Ted Collins and Ed Mishell and has not been readily available for more than 20 years.

This is Meir's second book. It features the magic he performs professionally. It includes: "Compucard" (one of his most popular routines), "Birds Of A Feather," "Signa-Fusion," "Invisible Poker Hand," "Thumb Through The Table," "Calculated Miracle," "Traveling Thumb," "Ghostwriter," plus much more. Thoroughly explained with over 150...

Magic From Down Under - World Lecture Tour by Paul Romhany

These lecture notes contain six of Paul Romhany's favorite routines that he has performed over the past twenty years. They range from stand-up to stage and even a little close-up ditty using business cards. There is something in here for every type of performer. 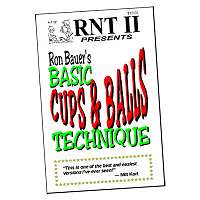 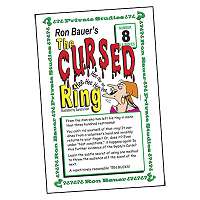 From the man who has left his ring in more than three-hundred restrooms!

You can't rid yourself of that ring! It vanishes from a volunteer's hand, and invisibly returns to your finger! Or does it? Even under "test conditions" it happens again!

Learn the subtle secret of using one method to throw the audience...