The highly anticipated Superior Rainbow Playing Cards is finally here! Featuring rainbow cold foil on the card backs & tuck and a soft-touch material for the tuck, this newest edition to the Superior line is a must for every card collection. Whether...

The Phoenix Deck Large Index has now arrived, and not a minute too soon! With a 50% larger index, your card magic is immediately more apparent to your audience....

Only 2,500 limited edition decks were meticulously printed, then sealed with a custom NUMBERED seal.

The gradual blend of blue to red on the deck's EDGES boldly peeks through...

The Black Dragon Series is playing cards reimagined. From unleashed dragons, samurais and Katana blades, to symbolic Koi fish representing an ancient legend, these cards are made to be used, but designed to capture the imagination.

How this deck series came to be...

The first image to take shape, which eventually played...

"Time reveals all. Thoughts become action. Clumsiness turns to precision. Failures lead to knowledge. Frustration gives way to breakthroughs. Struggle turns to resilience. Boundaries give way to creativity. What you live for becomes what you die for. Your life becomes your legacy."

The Journey Deck - Tarot Cards for the Empire Universe

Looking for a deck far different from the others? You found it!

A unique set of fantasy-playing and divination cards. This deck is designed in every way to appear both archaic and fantastical.

This is a deck unlike any other:

"I have never before been so excited to release a deck of playing cards to the world - this is a quantum leap in the possibilities of card magic and mentalism."
- Drummond Money-Coutts

The very last of the Mythical GRID Series from the collaboration of 4PM and Gambler's Warehouse and printed by the USPCC.

There are pioneering decks that are ahead of their time. It was in 2012 when 4PM launched the first edition...

The School of Cardistry V4 Deck

Since its humble beginnings 5 years ago, the School of Cardistry YouTube channel has grown to be an integral part of the Cardistry community, providing a free and easily-accessible resource to anyone interested in learning the art. We have now reached 100,000 subscribers, and we thank you, our loyal followers, for making this possible.

At the beginning of the summer, lace comes to our sight with sweet and attractive gestures, adding a romantic and charming color to the summer night. It is said that girls have begun to be charming because they have lace dreams. Then, women's dreams and men's dreams are also intertwined in this mysterious lace, entangled in life....

The Planets is a collection of decks representing the planets in our solar system, starting closest to the sun and moving outwards into the surrounding universe. The eighth deck of this series is Neptune, featuring monster-like sea creatures that thrive on the planet's freezing watery surface. This is the most luxurious...

Limited Edition. Only 2,500 printed and will NOT be reprinted.

The Planets is a collection of decks representing the planets in our solar system, starting closest to the sun and moving outwards into the surrounding universe. The ninth deck of...

First time deck creator, Elijah, is 11 years old. It took him over 3 months to create the Ghoul Guys Playing Cards with unique ghouls on every card!

He worked on the illustrations after he came home from school and during the weekends and holidays. Elijah spent a lot of time imagining and drawing all of these ghoul guys. He...

Don't wait for the wind to change - adjust your sails.

A new, nautical-themed deck of premium playing cards - with intricate detail in every aspect of the design. Even the INSIDE of the box has a gold foil, optical illusion pattern - like a mirage on the distant horizon.

Inspired by tales of sailors and their...

The new Virtuoso Fall/Winter 2017 Deck. All design. No borders.

With the Virtuoso Fall/Winter 2017 Deck's new multi-faceted design, your springs connect more fluidly in three-dimensional space, all while maintaining a beautiful rhythm across the deck.

This is a common Bicycle poker size deck, but ABSOLUTELY UNIQUE!

It's unique color design will surely get their attention.

Hearts are in soft red.
Diamonds in bright yellow.
Spades in blue.
Clubs in green.


Durable, Washable Plastic Playing Cards. Each deck has more that 50 hours of continuous play! These bicycle cards are 100% Plastic and are officially printed by the U.S. Playing Card Company. They can be used in any number of card routines. Plastic cards spring back to their original flatness and are very hard to mark or crease. Get more... 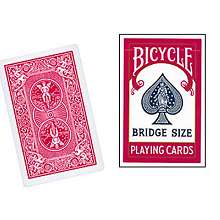 These series Bicycle playing cards features specialty designs and unique custom Jokers. Available for a limited time - Collect all decks within the series. Each deck provides you with the same exceptional quality you've come too expect from Bicycle. Now with a fun new look.

The Red Roses Playing Cards are finally here. Almost exactly one year after the very first Black Roses Playing Cards were released. Daniel's fascination for playing cards from the last century reflects more than ever in this deck of cards without losing the current zeitgeist. Along with the Orbit deck, the Black Roses and the...