A good reason to perform this classic once again. Why, you ask? Well, this version is the only Torch Through Arm where the torch actually floats in mid-air and a dove is produced as a climax! Now THAT IS reason enough! Performer begins by placing a metallic tube over his arm. Taking a lit torch, it is passed through two holes within the...

An exact duplicate of the Okito box with one important difference. The bottom has a recess that will accomodate a half dollar. This variation makes many amazing effects possible. 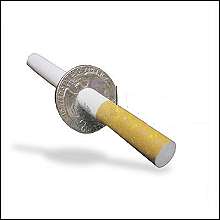 Cigarette Thru Coin by Johnson Products


This is a visual miracle. Picture this: Borrow a quarter, and borrow a cigarette. Then right under their noses you push the cigarette through the center of the quarter. Let the effect sink in, then pull the cigarette back out. You wont believe this gimmicked coin even after you've seen it.

Coin Off Ribbon by Johnson Products

Don’t let the low price here fool you. The method is simple but the handling puts it into the miracle class. A half dollar with a large hole through the middle is examined. The coin is then carefully and fairly threaded onto a piece of ribbon. The ends are held by the spectator as a handkerchief is thrown over the coin. Reach under the... 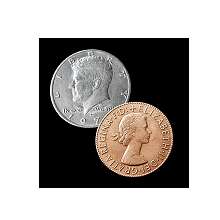 Copper/Silver Half by Johnson Products

A Kennedy Half (heads) on one side, the other side is an English Penny (heads). 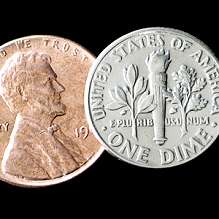 Dime and Penny by Johnson Products