Show a black metal plaque with a white line drawn on it. 6 magnetic white discs are attached to it. Now ask a spectator to move from the first side to the second as many dots as he wishes.

After you finish, take the prediction from an envelope and it will match the combination created by the spectator. There is no forcing, it is...

A magician took out five large playing cards, and each time they put two in the box, his cards were immediately recovered to five. When the audience thinks this is just pure poker magic, the magician's playing cards immediately become a pile of bills, bills can also be displayed in the front and back and then put the extra bills into... 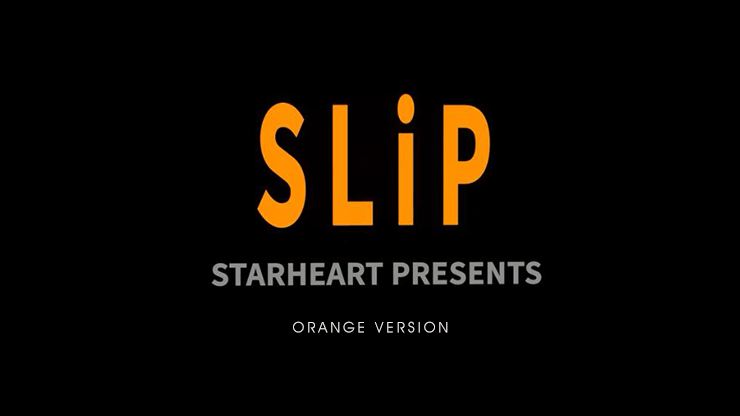 
From now on, the gravity is yours!

The SLiP is a small but very powerful and practical gimmick that can show psychokinesis to audiences anytime, anywhere. You can drop the audience's objects whenever you want without using wind, magnets, or threads.

This normal looking coaster will make your Winner's Dice more convenient. The combo of them enable you force any number without your spectator finding anything.

If you already own Winner's Dice, you should...

If you are chasing the LIFE STYLE magic, we think you have to try X-box 2.0

You take a box of milk from the goods shelf. But actually you want to drink juice now, then you give the box a little shake, the milk box has changed to a juice box!

It's visual, simple, direct and easy! No more words, no more movements,...


Transposition, transformation and which hand routines... Balance is a one-of-a-kind coin set which allows new approaches and principles never seen before.

The spectator freely choses one of the two coins and place it on...

"Adrian Vega is always surprising me! His ideas are visual, amazing and magical. But what I like most it is that everything that released are part of his professional repertoire. I am sure you will want to use Melting in your card magic routines. Bravo Adrian!"
-Martin Braessas.

Wild Dice by by Mark Leverage

What starts as a typical 3 shell game with a dice and 3 matchboxes, turns into a mindboggling magic routine, that culminates in three complete final loads (3 sets of white, red and green dice). However, there is no need of secret loads, as every shell is secretly...

"Purse" is a specially manufactured purse. It's handmade from genuine leather by expert craftsmen. "Purse" has a hidden feature that lets you perform three hard-hitting professional routines. Perfect for close-up and strolling magic:

The Flying Thimbles by Vernet Magic

Chink-a-chink is a miracle routine that has been performed by masters such as Max Malini, Fred Kaps and Albert Goshman. You can do this act of pure magic with a recognizable object: the thimbles. Everything is thoroughly examined by the spectators. The magician shows his hands empty. Then, the thimbles magically travel from one place to...

Welcome to Perspective: The Second Version.

In 2021, Julio Montoro released Perspective. It instantly became a bestseller, with hundreds of units sold out in just a few days. The internet cracked with clips of magicians performing it in their social media.

ATOM RINGS is a VISUAL demonstration of SOLID THROUGH SOLID!

In this version, You show four separate, solid rings of steel. You explain how you have the ability to break down atoms and pass a SOLID RING THROUGH ANOTHER SOLID RING, linking them together!! You do the same with the other two rings. You can even...

THE FIFTH DIMENSION is a trip to the future, past and present ALL AT THE SAME TIME!

In this version, You display a SOLID glass door and take your audience to the FIFTH DIMENSION! You go into the future, the past and the present ALL AT THE SAME TIME! You take a playing card and place it in the glass...

In 2020, Julio Montoro decided to release a new monthly subscription in Spain to share his creations with all his Spanish followers. It was just a 1 year project, but it was a total success, with almost 900 Spanish magicians joining the subscription,...

Can you manipulate destiny?!

Five strings extend from an envelope, but only one string is attached to the winning bell at the bottom. Allow your spectator to choose four of the strings, and the final string remains for you. Pull each of the selected strings...

Insert a solid, person-shaped figurine into the case, and close the lid. The lid contains many small holes directly above the figurine. One by one, insert a sword into each hole, passing each blade right through the person! When you remove...

Show the ace through five of clubs in your hand, and ask, "Which of these is the biggest card?" Your spectator will naturally answer, "The five." Suddenly the cards all change in size - the five becomes a tiny card and the ace expands...

THE FINAL PIECE 2023 by Tenyo Magic

A spectator randomly selects a jigsaw puzzle piece from a loose pile of pieces. The magician draws attention to a cloth that covers a completed puzzle on the table. He removes the cloth and shows that one piece...

With Acrobatic not only you will make the Tic Tac box raise alone in your hand but also the lid opens itself and besides one tic tac jumps from the box to your hand magically.

The trick comes ready to use with all the elements that you need to perform one and a video tutorial.

A borrowed bill and drink are shown. You now place the drink on top of the edge of the bill and let go. The drink is now seen to be balancing on the bill. Take the drink off the bill and everything can immediately be handed out for examination.

Everything can be borrowed

Everything can be examined before and...

The Thread of Life by Wayne Dobson and Alan Wong

Since the dawn of time the unanswered question for mankind has always been "Why are we here?". Wayne explains Alistair Witchell's theory. Could it be closer to the truth than you'd expect?

Throughout his TV series 'A Kind of Magic' Wayne...

One of THE most recognizable magic props of all time just LEVELED UP for the 21st century... introducing ProCaps by Lloyd Barnes.

Known to most as Dynamic Coins or Nickels to Dimes... this classic "beginners" magic toy has remained an all time, global bestselling trick for 3 reasons: