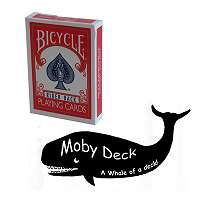 Moby Deck is a Whale of a Deck! It looks just like a real Bicycle Poker-size deck of playing cards, but weighs nearly 1.5 POUNDS! Use as a BIG surprise finish to your favorite card effects.