Vol 5
PRODUCTIONS AND VANISHES leads off with Dr. Michael Rubinstein's three coin production and vanish sequence, called Triple Play. Batting second is Bologna Debut, Rubinstein's wild four coin production that ends up with a coin at each corner of your close up pad. Two Card Reverse Matrix is an uber clean version that includes for the first time ever, the patter Rubinstein has held back for years! David Roth follows with his reputation making Hanging Coins routine. Mike Gallo joins the party with a startling Four Coin Production, and to finish strong, special guest Dr. Kainoa Harbottle demonstrates not one, but TWO versions of Hanging Coins using his own innovative techniques.

PENETRATIONS begins with Rubinstein's Coins Through the Table, revealing for the first time his startling kicker ending. Roth shows a classic version of Coin in the Bottle, with some beautiful touches of Slydini. International Penetration and Coins to Expresso Cup come out of Gallo's professional repertoire, and Spectator Boy Dan Watkins is back to help! Closing this section is a World Premiere performance of Cylinder and Coins by none other than special guest Giacomo Bertini, the Italian coin Maestro.

Twelve routines might be enough for some, but not the New York Coin Guys! The BONUS section starts off with a performance of Rubinstein's professional act, utilizing routines taught in all of the Seminar DVD's. Roth follows with an in depth discussion of the Classic Palm. In a snippet from his New York Coin Magic Seminar workshop, Rubinstein teaches the wave change and a few NEW variations. Closing out the DVD is a performance by Gallo called The Bottomless Cup.

PENETRATIONS starts off with Roth explaining three methods for Coins Through the Table, including Kap's Squashed. Rubinstein follows with a new way to do an old trick, in Bill through Quarter. Rubinstein's Penny Roll is the Ball and Tube done with coins. Guest host Marc DeSouza returns in this series to perform his take on Cylinder and Coins.

The BONUS section is a virtual lesson on coin magic. After a performance of The Tuning Fork by Roth,. Mike Gallo goes over several moves and routines in a selection of material from his New York Coin Magic Seminar workshop. There is a performance of Gallo's Coins Through the Table with the classic Gallo kicker ending, followed by an in depth lesson on Pinky Technique from special guest Giacomo Bertini. Ending this disc is a special offering from guest contributor and young gun Eric Jones, called Tai Chi Penetration.

Volume 7
PRODUCTIONS AND VANISHES begins with a a surprise - a routine with cards by David Roth, called Coin Cut. Mike Gallo teaches one of the routines he has been doing for over 30 years, The Pocket Counterfeiter. Circles is Gallo's take on Bob Fitch's routine. Dr. Michael Rubinstein offers his renditon of The Black Hole, as well as Mint Condition, a coin to impossible location that utilizes a box of breath mints. Special guest Giacomo Bertini is back to perform a new routine, called Coins and Corners. Finishing out this section is special guest Dr. Kainoa Harbottle with an instantaneous multiple coin vanish called Flying Wombat and Squishy.

PENETRATIONS leads off with Roth's Coins Through the Mini Table. Gallo's offering is a multiple coin penetration called Three Times Through. Dr. Rubinstein presents a Stand up Coins Thrugh the Table, as well as a unique Karate Coin routine. The section finishes with Gallo's handling of the Cylinder and Coins.

The BONUS section completes the material in the series. Roth presents ideas for a complete show with coins, in a segment of his own workshop from the New York Coin Magic Seminar. Guest host Marc DeSouza goes back to the classics with Ramsay's Three Coins in the Hat. To finish, guest contributor Dan Watkins offers an entertaining routine called The Imperceptual Purse. 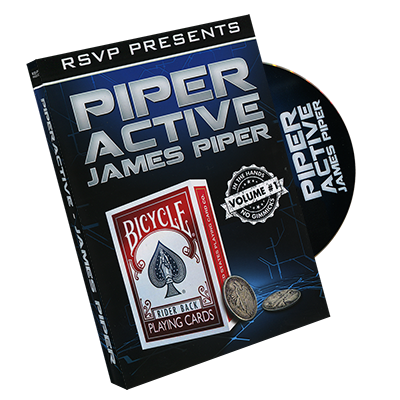 Piperactive Volume 1 by James Piper and RSVP Magic
The Doctor Is In - The New Coin Magic of Dr. Sawa Vol 3
Amazing Magic With A Scotch & Soda
Coins - Lair