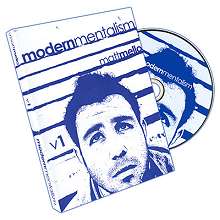 Modern Mentalism is a collection of 14 effects from the mind of Matt Mello, spanning 2 volumes. It is one of the few DVDs on the market that appeals specifically to the entertainer that performs mentalism close up. Another unique feature of Modern Mentalism is the absence of sleight-of-hand methods and awkward props. Instead, Modern Mentalism uses clever principles, interesting plots and extremely simple methods to create a collection of close up mentalism worthy of both casual and professional performers.

:: Serial :: An on-the-spot serial number reading, requiring nothing more than a borrowed dollar from your spectator.

:: Photographic :: If you could really memorize a long string of code in seconds, it would probably look something like this.

:: Lottery :: This is Matt's version of the add-a-number routine, using the lottery as it's theme. It uses no switch pads or gimmicks, and as a bonus, Matt also teaches a way to do this effect with absolutely nothing on you but a pen and paper.

:: Stop :: A demonstration of suggestion and influence during a simple game with cards.

:: Handy Prediction :: A spectator is asked to hold their hand up, and then drop any amount of fingers. A card the performer is holding predicts the spectators actions.

:: Any Card at Any Number :: Forget about complicated math and card counting and all of that, and get ready for one of the simplest solutions to the "Card At Any Number Plot". With only a deck of cards and a prediction, you'll be able to perform one of the easiest, most baffling effects imaginable on your spectators.

Volume 2
:: PS I Love You :: An impromptu and powerful demonstration of the connection and bond between people, using an ordinary deck of cards.

:: GI Joe :: A method for revealing multiple pieces of information, using an object that you can pick up nearly anywhere.

:: Billet Tear :: With this simple tearing sequence, you'll be able to reveal almost any piece of information that the spectator can think of.

:: Instinct :: This is a simple Russian roulette routine which has been used and tested by Matt for many years. The method is genius, and once you learn it, you'll be able to perform this miracle with a variety of presentations. Also included is a bonus idea not offered on the original Instinct video, something which gives the effect a nice extra punch at the end. Warning: Do not perform this effect if you are under the age of 18. Anyone who performs this takes full responsibility for their actions.

:: Preservation :: A multiple phased pk effect in which you're hands, wrists, and even the objects/environment can be completely examined beforehand.

:: Point and Predict :: After the spectator shuffles the pack of cards and spreads it across the table, they are asked to touch one, their choice completely free. The card box is then opened, showing a prediction that's been in play since the beginning. It predicts their chosen card.

:: Dark Arts :: A drawing duplication of the simplest design. The spectator makes a drawing, which is concealed in an envelope and held in their own hands. The performer then makes a drawing that perfectly matches the spectators. 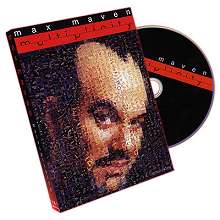