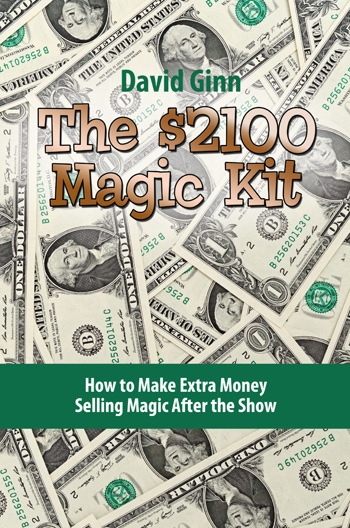 Way back in 1992 David Ginn developed a simple magic kit using clip & paste tricks, a cheap two-card monte, and a fortune telling fish. As he and 13-year-old Autumn criss-crossed Georgia that summer doing 82 library programs, they ended up selling 2100 kits at $1 each, thus the $2100 Magic Kit. On this DVD David carefully explains how he created and made the kits, what he puts in them, and WHY they sold then and still sell now. But there’s more —

On the second half of this DVD, David shares seven money & counting tricks he has used in school shows and even close-up. These include a performance of Money Hands from Lost Magic, plus Sixth Finger Countdown, Jumbled Number Silk, Panelo Bill Production, Australian Six Bill Repeat (and how to make it), Bob Escher’s 7 ½ Coin Trick, the Magic Money Poster, and Balancing a Coin on a glass. These are bonus tricks you can and will USE in your shows!

Running time 43 minutes. And worth far more than the asking price