Standing Up on Stage Volume 3 Feature Acts by Scott Alexander* 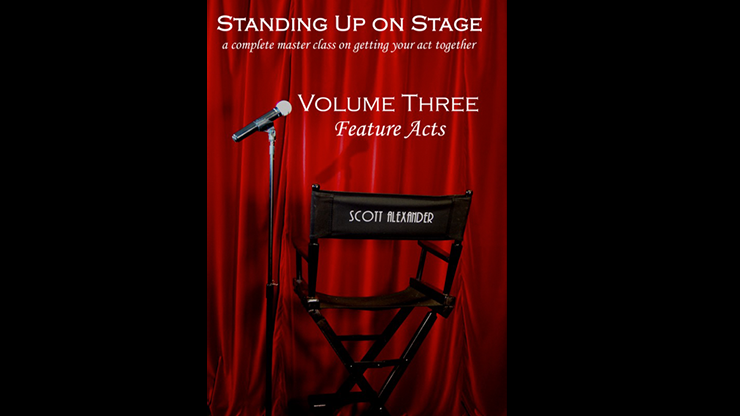 In this third of five volumes, Scott teaches you how to analyze your effects to create a rich and well-rounded show. Revealed in this volume on the Director's Guide section are tips on the effective use of audience participation and spectator management. In the Character Development portion, Scott wraps up the process of helping you to hone in on your character using the "Style Star." He gives you examples of how to turn the star you create into an effective marketing strategy.

MALINI EGG BAG
The most bullet-proof trick in magic is tipped in full detail. It is comedy, audience participation and pure magic. This is the trick that you will want in your arsenal that's always ready to go and can be done anywhere under any conditions.

THE FLYING RING
Long pigeon-holed as a close-up effect, Scott teaches you how to take Ring Flight to the stage and how this thinking can help you frame other smaller effects you already perform.

KILLING IT
A terrific premise for the classic balloon murder plot that involves the whole audience creating sound effects for a murder mystery. Plus, Scott's premise of "killing an idea" has lots of comedy potential.

INDIAN MEMORY MAN
Published in For Bob Cassidy, this is Scott's humorous twist on Bob's Master Card Memory, featuring tons of laughs and a devastating effect.