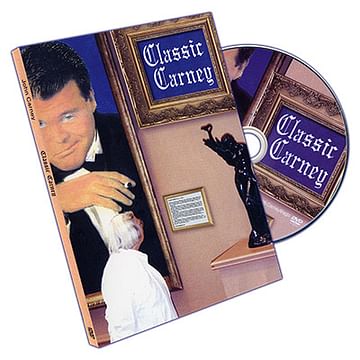 Critics proclaim this one of the more robust of Mr. Carney's videos. Made during his "Carneycopia" period in the countryside at the base of the hills at St. Remy, shortly after the infamous quarrel with Gauguin, which tragically, left him with only nine toes.

Boldly emblazoned across this video canvas are eight lessons in state-of-the-art sleight of hand. The works are first unveiled under practical everyday conditions. You are then led in a quiet and orderly fashion into the studio, where with the assistance of broadcast quality production, the art concealed within the art is clearly revealed.

Included are; a mysterious prediction; the penetration and vanish of a pack of cards in a napkin; an impromptu animated matchbox; a revolutionary display for changing the colors of cards; a chop cup routine with a borrowed bill and coffee cup, climaxing with the appearance of a lemon around the bill; a visible "Triumph" effect; and the impossible bare handed vanish and reproduction of two coins.

Also included are discussion on the psychology of creating illusion, some valuable life lessons, and a brush with some gratuitous comedy "hi-jinks". To be frank, we don't know John Carney, but we know what we like. Invest now - in a few years, it could be worth millions!