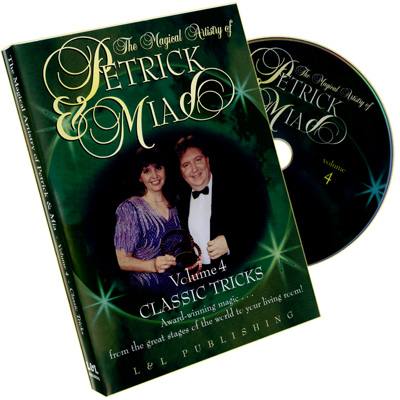 Petrick & Mia have cast their magic spell over audiences the world over-from the showrooms of Las Vegas to the most prestigious stages in Europe. Winners of many of magic's most celebrated awards, including the Dragon Award, FISM Special Award of Merit and the Academy of Magical Arts Award, Petrick & Mia's special blend of magic, comedy, modern wizardry and originality have enchanted and amazed audiences for over 20 years. In this stimulating video series, Petrick & Mia perform their original magic creations for an enthusiastic audience and then take you backstage to meticulously explain the devilish and innovative workings of it all. You'll marvel at the impact of Petrick & Mia's magic and then you'll be thrilled at how clever the thinking behind it all is and how simple it is to add these miracles to your own act. Whether you do stage, parlour or close-up work, you'll love the magical artistry that is Petrick & Mia.

In this volume, Petrick & Mia perform and demonstrate many of their own original magic creations. If you've purchased any of these effects at their numerous lecture appearances, this will be the next best thing to personal instruction. If you don't own these dynamite effects, you'll certainly want to after watching the strong audience impact they have.

Straw Through The Card - A true Petrick & Mia classic. A length of drinking straw penetrates a selected playing card leaving no hole or trace in the card.

Ring on the Rope & Knotted Card - A borrowed finger ring, dropped into a bud vase, becomes magically knotted onto a length of rope. Likewise, a selected, signed card, placed into a small shopping bag, is also lassoed.

Buzz Saw Card - A visible penetration of a playing card straight through the other 51!

Coin Through Banknote - A jumbo coin passes through the center of a folded piece of currency.

Lethal Teeth - A classic comedy card trick. A set of gag teeth finds two selected cards. The first card is found held tightly clenched by the teeth. The set of teeth finds the second card by apparently biting off a corner. When the teeth are opened, the corner that fits the card is found inside the jaws.

Houdini Card Escape & Vertical Rise - A selected, signed card rises to the top of the deck while it's in the spectator's hands!

Rings of Smoke - Three flat rings are linked and unlinked and finally penetrate a length of ribbon. Unbelievably, the rings are then passed out for examination!