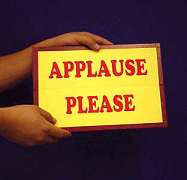 This is a nice gag, with a magical touch, which any performer can use to milk a little extra applause, or coax some out of a "dead" audience! Performer holds up a card which says "APPLAUSE PLEASE". this will bring a few claps, so he turns it around, and it reads "LOUDER". Hopefully, the audience responds with a perceptible increase in the decibel level!

So the card is turned around again, and now it now reads "THAT'S ENOUGH". Use it as a running gag, and the response will grow with each performance. A simple easy to use item, that packs flat at the bottom of the suitcase, and makes for a good laugh in any show!