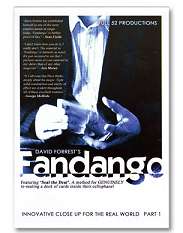 Part 1 in a series of releases containing all new material designed with the intent of providing real world close up magicians with fresh, practical material.

Six brand new, never before published effects fresh from the mind of Dave Forrest. The material contained within has been carefully selected to be both entertaining and practical. This is not a 'read it once' release. It is filled with effects that you will actually use in the real world for real people. Fandango Part 1 - ALL KILLER, NO FILLER!