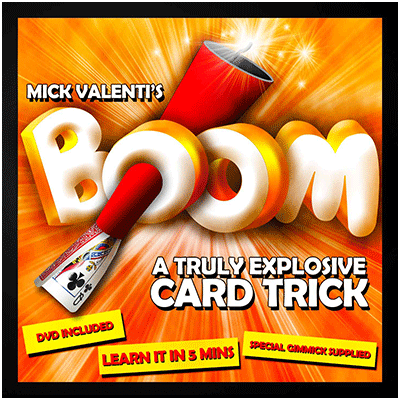 Imagine this...
The spectator chooses a card then cuts it into the deck. While the spectator holds the deck in one hand, the magician gives the spectator a fused half stick of dynamite to hold on to. "I'll find your card before this 10 second fuse burns down", the magician boldly announces. With that, the Magician lights the fuse, but instead of a ten second burn down the fuse burns in a flash followed by a large unexpected BOOM! Spectator drops the dynamite, (and many times throws the deck of cards in the air, and hopes they have a strong bladder). The Card Has Vanished! The deck is shown to be void of the chosen card. But when all calms down the spectator picks up the stick of dynamite and pokes a quivering finger through its center only to find the selected card. Suited for close-up, stand up, street magic, and stage.

BOOM 2 (Signed card)
Same basic effect;
Use ANY deck of cards! Spectator signs and seemingly shuffles their card back into the deck.
This bonus effect includes a brand new card slight designed with Boom 2 in mind but can be used in many other applications.

Please note: You supply the dry underwear for your spectator.